LoginSearch
You are here: Home / News / Airbnb now worth more than the Marriott group

Airbnb is now estimated to be worth more than the Marriott group in the travel space and is the third highest-valued privately held tech company behind smartphone maker Xiaomi and sharing economy peer Uber.

A reported new funding round has been valued at US$25.5bn, which is more than double what it was estimated to be worth in April last year.

Airbnb did not even exist eight years ago, yet it has carved a very deep niche by thinking up a way for travellers to find accommodation cheaply by making use of what people are not using – spare rooms, empty houses and apartments.

Airbnb has managed to disrupt the very mature travel market, but hotels and resort owners are using Airbnb to fill empty rooms.

Airbnb has more than 1 million properties listed across more than 190 countries and an expected US$900m in revenues this year – rising to US$10bn by 2020 It is the clear leader but it is not alone as the only disruptor in the hospitality sector. 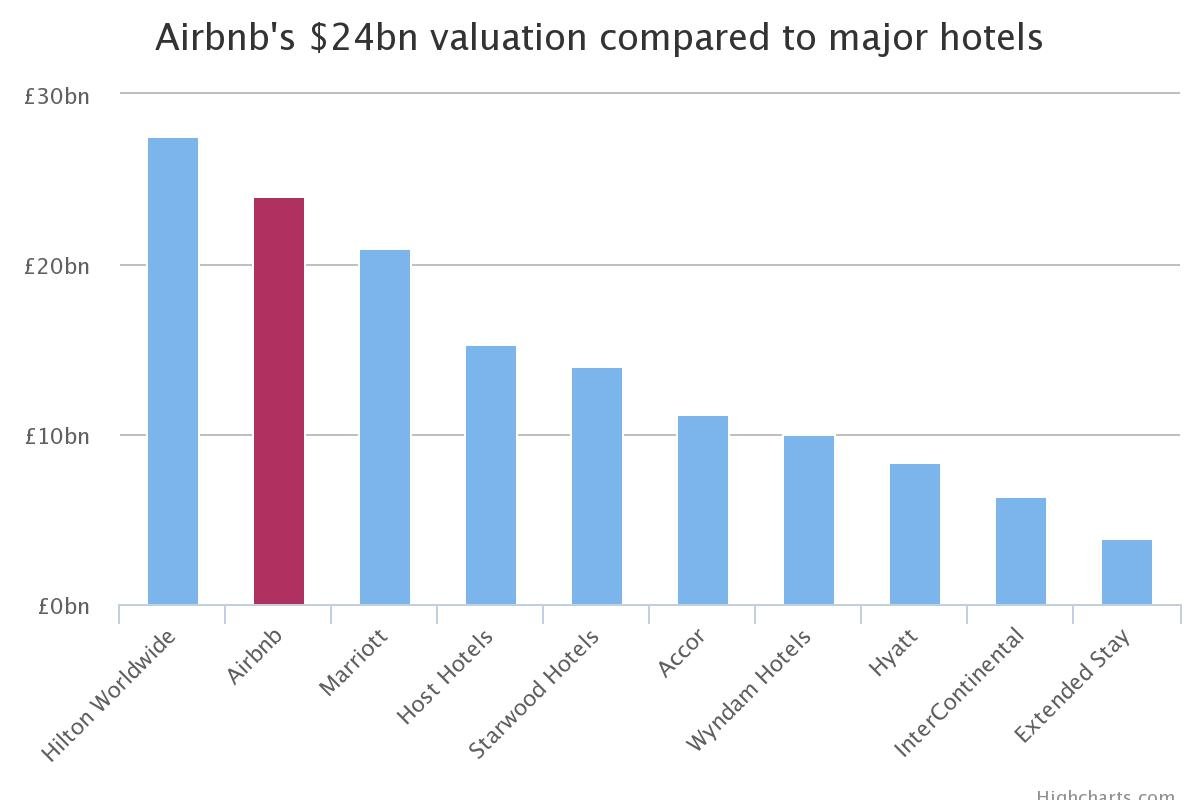 London-based Onefinestay, which focuses on more high-end prices and users, is now bringing on a US$40m Series D round. Active in London, New York, Paris and LA, the startups’ total funding now sits at US$80m, with the inclusion of a previously unconfirmed US$25m Series C round. A similar service Luxury Retreats, which actually claims to be profitable, also raised US$11m this month. Hyatt Hotels is among its investors.

Love Home Swap is another London based hotel disruptor. It has taken on US$12m in new funding from Wyndham Hotels, owner of the Ramada and Travelodge hotel brands.

This whole concept of the Sharing Economy is also being used by Uber, car sharing companies, and a growing number of other which include the important crowd funding market.

The sharing economy has one major dark cloud on its horizon, that of regulation. While it has well outpaced all the rules in place to regulate traditional businesses, governments and law makers are working hard to amend rules to bring these organisations back into the fold – not least in terms of charging tourist taxes. Some cities, including Barcelona and Berlin, are banning landlords from renting properties exclusively through sharing companies such as Airbnb. London and Amsterdam have changed their rules for long term renting.

Paris is Airbnb’s biggest market with 40,000 listings. It faces a government crackdown, because of the lost of tourist taxes. In the UK, it has had a total economic impact of £502m – including £243m in direct spending and £259m in induced spending – and supports 11,629 jobs. This is according to James McClure, Airbnb general manager UK and Ireland.

Sharing
Not everyone wants to stop the sharing economy.
In the March Budget, George Osborne unveiled “steps to put Britain at the forefront of the online sharing economy”.

Government employees would be encouraged to use these services, which are often cheaper and more convenient, to book accommodation and transport while travelling on official business, the Chancellor said.

The average Airbnb visitor spent £911 in 2013, of which £570 was spent at local businesses in the neighbourhood where they stayed.

Figures from the Office for National Statistics this month show that accommodation contributed more to the UK economy than any other tourism subcategory in 2014, outperforming other subcategories such as air transport, food and drink, travel agencies, sports and culture.