American Express and Marks & Spencer have won eight out of eleven categories in the UK customer satisfaction awards run by consumer website uSwitch.

Traditional banks failed to win a single award for the second year running, and uSwitch says the high street banks are the most likely to disappoint – customers of Santander, Lloyds and RBS voted their banks the worst for customer service.

While the high street banks failed to win any top spots, Amex was voted the most likely to be recommended to a friend, had the best application process, the best product information and offered the best value for money and came best overall.

Best overall
After slipping from top spot last year, American Express returned to top spot with 92% of its customers happy with its overall service.

Jose Vazquez-Mendez, VP customer service UK, American Express, commented: “Customer satisfaction has always been a top priority for American Express and it’s good to see that our Cardmembers are happy with the service we deliver them.

“However, it’s important that we do not rest on our laurels and that we build on this success so that our customers continue to receive the level of customer service expected of us as one of the largest card providers in the world.”

M&S came a close second in the survey of 10,000 UK credit card users, with less than a percentage point between them.

uSwitch says customer loyalty at both companies is well rewarded: Amex gives £100 cashback in the first 3 months and 0% interest on new purchases in that time, whilst M&S offers 0% for 6 months and reward points when you use your card.
M&S was voted number one for best customer support, with 83% of its customers satisfied, whilst Amex slipped from number one to number three.

The big banks were the most disappointing with RBS, Lloyds and Santander struggling at the bottom of the table, as customers showed their disappointment with lack-lustre customer relations.

Worst provider
RBS has had the biggest fall from grace, slipping eight places from last year to find itself at the bottom of the table in three separate categories: overall satisfaction, interest rate charges and value for money.

However, it was Santander that came bottom of the banks, finishing last in five categories including customer support, online services and billing services.

Overall Satisfaction
Nationwide comes in third for overall customer satisfaction, but the survey shows there is little between the top five, suggesting there is still plenty to play for.

At the opposite end of the spectrum, the big banks dominate. Consumers vote RBS as worse for overall satisfaction, closely followed by Lloyds TSB, Virgin, Halifax and HSBC. None of the high street banks top any category. Only Santander manages second place for its balance transfer service and interest rate charges.

Overall Customer Satisfaction with their Credit Card Provider, 2009 and 2010 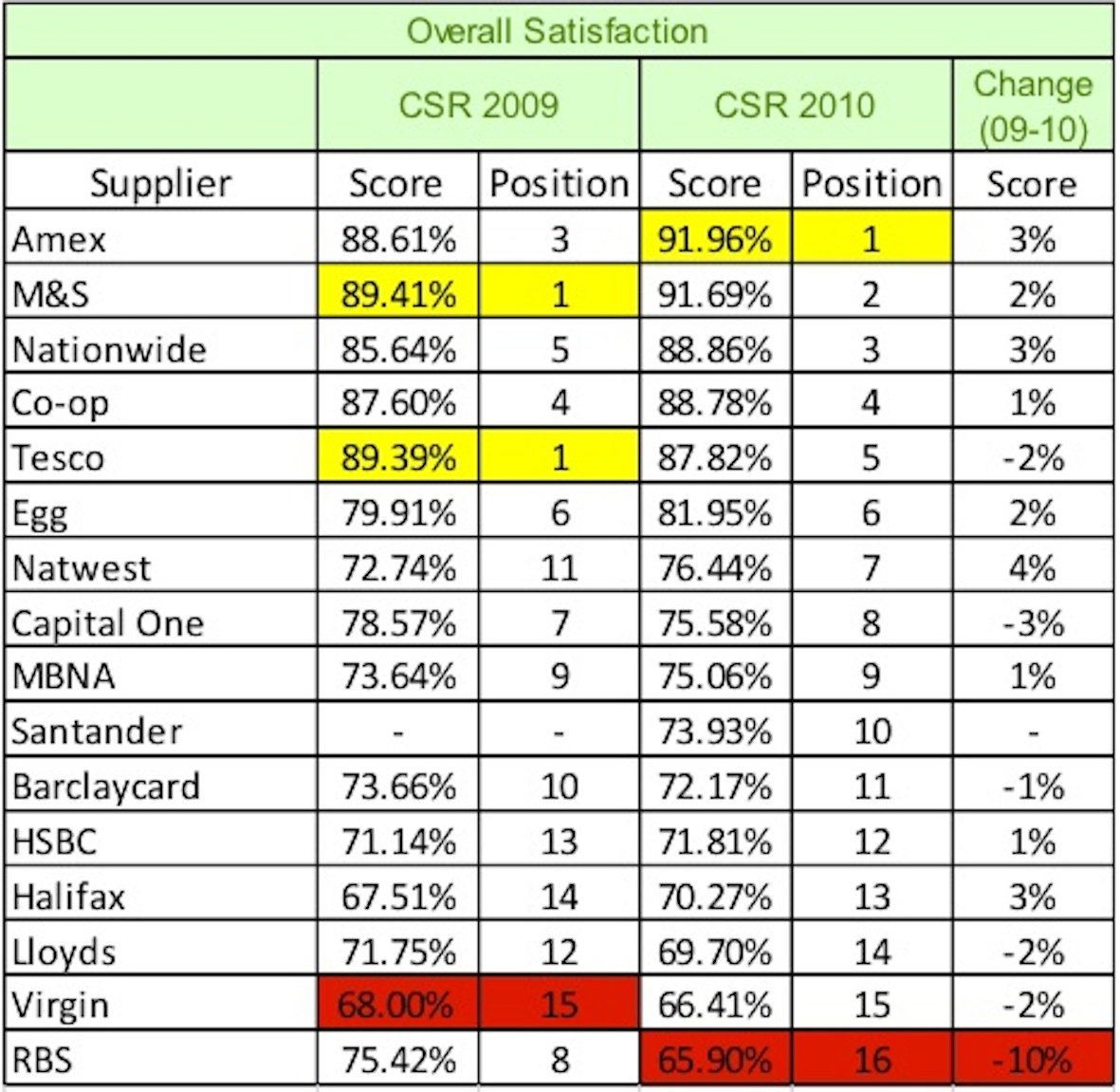 The survey also found that although nearly two million are dissatisfied with the everyday service provided by their card company, consumers are holding onto their cards for longer. Over half (51%) have had their credit card for more than five years, compared to 46% in 2008 and 50% in 2009. This may be a reaction to it being harder to get credit now, but it also means consumers are missing out on new deals on the market. In fact, over two million (8%) are aware that the interest rate on their credit card is below average or even one of the worst on the market – yet many still do nothing about it.

When it comes to choosing a credit card, uSwitch says savvy consumers are on the lookout for a card that gives something extra, with almost a third (30%) saying they chose their card because of the rewards or points it offered. Tesco performed well across the board, coming in the top five nine times, and much of this success can be attributed to its generous reward scheme. Less than one fifth (18%) made their choice because it was a recognised brand, while the prestige offered by a company is only important to 1% of consumers.

David McCreadie, MD of Banking at Tesco Bank, said: “Tesco Bank aims to offer its customers great value and strong customer service across all of its products and we are delighted that our customers rate the Tesco Clubcard Credit Card so highly.”

UK customers have already caught on to supermarket finance – supermarkets now account for 30% of all credit cards in the UK, providing a real competition to high street banks.

Stefan Maryniak, personal finance expert at uSwitch, says customers who are disappointed with their bank’s services should vote with their feet: “2011 is set to be another tough year for consumers.

“Although our reliance on credit cards is increasing, not all plastic is fantastic.

“Customer service is still letting the credit card companies down, especially amongst the high street banks, which provide some of the worst service in the market, despite some being government funded.”

He said that, instead of putting up with poor service or an uncompetitive rate, consumers should look at spending a little bit of time shopping around for a better deal.

“If used sensibly, credit cards can be rewarding, and nearly one third chose their most recent card based on the rewards or points it offered,” said Maryniak.

“With generous rewards such as loyalty points that can be converted into cash, gifts, airmiles or money off your shopping bill, it’s easy to see why the supermarkets such as Tesco and American Express are doing so well.

“By not taking the time to research the best deals available, millions of consumers are letting their providers get away with levels of customer service and value that are far from competitive.

“Consumers need to make sure they are taking matters into their own hands and find the best deal for their individual needs.”

Previous Post: « US Fed cap causes beginning of the end for debit rewards
Next Post: Special report into Citi Cards in the US »