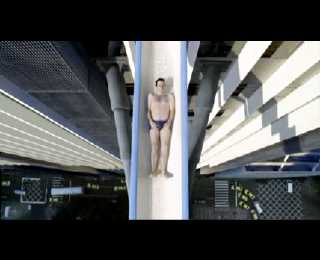 The waterslide game sets a time limit for the player to complete a puzzle to ensure the safe arrival of the game’s character as he travels through a city using a waterslide.

The game is based on the waterslide advert first aired in the UK in 2008. It featured an office worker avoiding the hassles of public transport by taking a shortcut home via a waterslide directly to his house, using his contactless card to make payments on the way. The video has proved popular on the internet, with more than 1.3 million views and a further 60,000 views for the ‘Making of…’ video.

The free application for the game, developed by fishlabs and Dare, will be available for download from mid-July.

Paul Troy, head, advertising and sponsorship at Barclaycard, commented: “The launch of the iPhone “Waterslide Extreme” game is a first in financial services. The Waterslide ad has engaged millions online and this game gives consumers the opportunity to go on the Waterslide themselves.”

In March Barclaycard ran a follow-up viral marketing campaign asking for home-made versions of the ad to be posted on YouTube, with the video receiving the most votes winning a trip to go on waterslides around the world.

Barclaycard’s contactless credit card allows holders to make payments of up to £10. There are currently 3,000 readers in London and another 3,000 nationwide.