LoginSearch
You are here: Home / News / Coalition Schemes / Boots may open Advantage Card to other partners 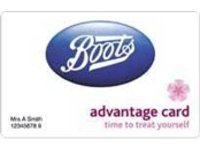 The health and beauty company, which lost its title of biggest UK loyalty scheme to rival Nectar earlier this year, would allow its 16 million active cardholders to collect points at partner stores.

The move, said to be at an advanced stage, would see another major player in UK coalition loyalty alongside Nectar and the recently launched Barclaycard Freedom. Tesco’s Clubcard scheme is involved in coalition loyalty through its partnership with AirMiles.

Boots would already seem to have some ready-made retail partners in place. The Alliance Boots parent company, which is owned by private equity company KKR, is withdrawing optician’s chain Dolland & Aitchison from the Nectar scheme this month following its merger with Boots Opticians.

Earlier this year Boots and grocery chain Waitrose started selling each other’s own-label products in a limited store pilot. Boots has also partnered with children’s retailer Mothercare which is to start a clothing and accessories brand in Boots stores in the autumn. Retail partnerships would initially be run for online purchases, before expanding to high street stores.

Executive chairman Stefano Pessina has been actively pursuing a strategy of growth via acquisitions and partnerships.

KKR is thought to be keen to exploit the data marketing potential of the millions of Advantage cardholders following its £1.1bn purchase of the company in 2007.

Sainsbury’s CEO Justin King said in the Times earlier this year that there will be “a big difference between the haves and have-nots, with data. Those with loyalty data can see what customers are doing. If they are going elsewhere for a certain product, we can incentivise them to buy it with us.”

He said loyalty cards will increasingly become a part of a retailer’s weaponry and it is increasingly not a choice whether to have a loyalty programme at all.

In February Sainsbury’s, a founding partner of Nectar, said that the scheme had 16.8 million cardholders and had overtaken Boots Advantage to become the UK’s biggest.