Bribery proves powerful incentive for Coke?
Coke’s customer loyalty website, www.MyCokeRewards.Com, has seen a 13,000% increase in the number of hits it received in a year.
The number of hits increased to 8.6 million in Q3 2007 from 66,000 in the same quarter a year earlier, and the site now attracts around 285,000 visitors a day. 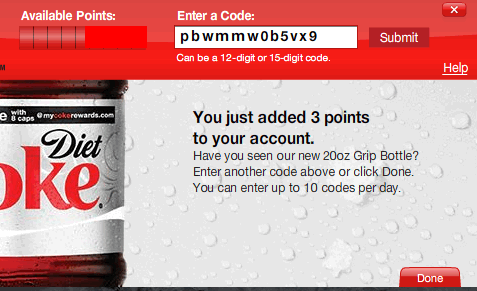 The site has attracts visitors by handing out around 5 million rewards, with consumers able to redeem codes on beverage bottles for prizes including magazine subscriptions, beauty products and electronics.

Coke partners with a range of brands including American Idol and the NCAA to bring consumers to the site.

The soft drinks company uses a Fair Isaac service to track which prize areas registered users visit. That intelligence is fed back into the site so that when users sign on, the site triggers promotions of redeemable products targeting their interests.

Coke’s web development team has designed a software development kit that advertising agencies around the world can use to create Coke customer loyalty sites focused on various demographics.

There are 40 Coke websites in all, ranging from broad-audience sites similar to the original, such as the United Kingdom’s Coke Zone, to those targeted at specific users like one for World Cup Soccer supporters in Europe. The idea is to bring consumers into the Coke loyalty programme from a number of avenues, including promotions at soccer games and motor races.

To tie in with this month’s Beijing Olympics, My Coke Rewards is offering members a variety of special Olympic-themed rewards and experiences.