LoginSearch
You are here: Home / News / B2B / Can’t get round all the branches? Hire a hologram

Can’t get round all the branches? Hire a hologram
It is always a problem with large companies. How does the boss manage to be everywhere at the same time, especially on special occasions? 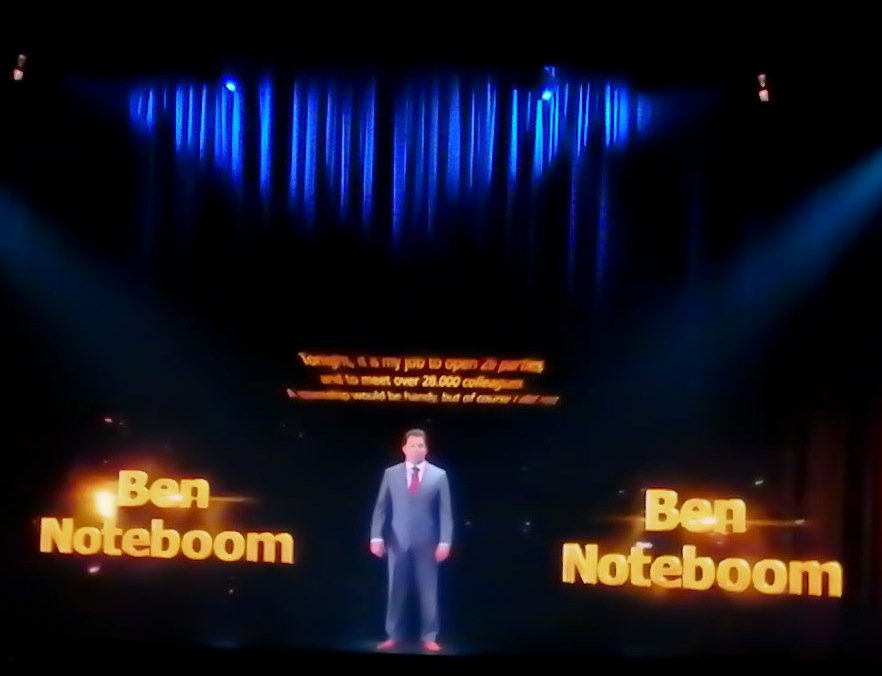 Everyone knows that the personal touch is best, but traveling from location to location to deliver the same speech can be an energy sapping use of top executive time.

The CEO of Randstad, the second largest global recruitment company located in 44 countries, solved the problem by being there in spirit, or at least in hologram.

Ben Noteboom managed to speak personally to every one of his 28,000 employees on the day of the company’s 50th anniversary by appearing on stage as a holographic image.

It wasn’t live – he had recorded the speech in four languages (English, Dutch, German and French) with subtitles in 9 languages but even so, it is damned impressive.

Musion, the exclusive master global Licensor for the Eyeliner system, is the company behind this patented holographic technology. The company collaborated with a network of 16 international resellers and Randstad to create the global celebration.

As well as the CEO’s speech, a holographic appearance of top ranking international DJ Markus Schulz launched each party with an exclusive 2010 remix of Randstad’s corporate theme tune, “Good to Know You”. Top ranking local DJs then took over the set in each location around the world.

Randstad says it shares a belief with Musion in training and supporting emerging talent in the visual arts and has worked with the Musion Academy to sponsor a global visual arts competition.

Facilitated by Musion, visual artists used the Musion system to display their artworks at each of the 26 locations and will be now judged online by the 28,000 employees in attendance.The competition attracted entrants from all over the world, ranging from new artists, such as VJ Super Geek from Australia and VJ Ventoline from Tokyo, to better known names such as Shantell Martin from New York and London’s own New Opera Hero. The winning artist will be presented with the trophy and a €3000 prize fund at the MAMA’s Gala in London, December 2010.

Ainsley Henn, Channel Development Manager of Musion, stated: “This was the biggest and most challenging project we have taken on to date, but also the most rewarding and enjoyable. “I look forward to working with more people and businesses on an international scale.”