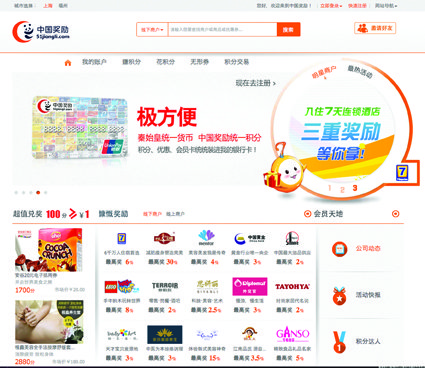 Many major Chinese merchants have large and detailed customer databases, but have yet to fully capitalise on them.

China’s first coalition loyalty programme – China Rewards – plans to rapidly expand this previously undeveloped loyalty sector with an offering that is influenced by western models, but also takes into account the idiosyncracies of the local market.

Cindy Wu, CEO of China Rewards, says: “It’s a merchant-founded coalition programme but the Chinese market is very different from those where Payback or Nectar operate and much bigger.”

She says the scheme currently has “a few million” members. “It’s very early days,” says Wu. “The Chinese market is very large and fragmented so we could not do a national rollout all at once. We are focused on the big first tier cities, Beijing and Shanghai, and it will take at least three years to roll out across the country.”

The Chinese loyalty market has proved a tough nut for foreign retailers to crack. Having opened its first branches in 2004, Tesco hoped to build a large solo retail venture in the country driven by its Clubcard loyalty scheme. It had to admit defeat in 2013 and handed over to China Resources Enterprise, with Tesco keeping a 20% stake.

There are few truly ‘national’ brands in China and some cities have their own local brands, which makes the coalition model more complicated to operate.

“Nectar, for example, only needs to work with 20 big brands to cover everyday spending. In China you need to work with at least half a million merchants,” says Wu (right).

Spending patterns are also different. Supermarkets are not the dominant players in food retailing, with people just as likely to go to local markets and convenience stores. Fashion and motel chains tend to have the most extensive regional coverage.

China Rewards is partnered with the Sina chain of petrol stations, which are common in many regions of the country. Other partners include China Mobile, the Carrefour supermarket chain and a range of speciality shops including jewelry chain China Gold.

There are a few non-Chinese partners such as Canadian luxury jewelry brand Birks and wine seller Terroir. Restaurants are useful loyalty programme partners in China as eating out is very common.

“Our programme has some unique features,” Wu says. “We don’t issue a card, we use UnionPay cards and our system is connected to UnionPay’s clearance system so we are simultaneously able to process loyalty points and redemptions while UnionPay processes the payment.”

Payment cards previously only earned points on bank schemes and China Rewards claims its earning rates are up to ten times higher, offering 20 points for every yen spent depending on the merchant.

The offline retailer version of the programme started on October 18 last year, following the online variant which began in 2012.  According to China Rewards, 88% of payment card spending in the country is at offline retailers, 6% is online and a further 6% is on overseas expenditure.

Members can earn points at offline and online merchants, and China Rewards also provides its redemption solution to a number of banks such as HSBC which has 40 million cards in China. In addition it is a partner of telco China Mobile, which has 20 million users, and is linked with many of the country’s salary cards.

UnionPay partnership
China Rewards is working with UnionPay to upgrade the payment network’s huge terminal base in the country to enable more interactivity with the programme, and has currently rolled out several thousand new POS devices.

“The POS is something unique for us, we don’t just do payments,” says Wu. “People can register for the programme by keying in their mobile number when they use their card at the terminal, in addition to printing our p

oints balances and offers on receipts.”

Foreign expenditure
Foreign travel is increasing among China’s rapidly expanding middle classes, with around 6% of expenditure on payment cards taking place abroad. To tap into this demographic, China Rewards has partnered with Aimia and Points.

Using the Points platform members can collect other rewards currencies from overseas expenditure, such as airline and hotel bookings, and convert these into China Rewards points. It is currently has 25 international rewards partners including Asia Miles, American Airlines and Hawaii Airlines.

“The Chinese loyalty market is very much in its early stages, but the scale and potential is quite staggering,” says Points CEO Rob Maclean. “Shanghai and Beijing both have populations of 30 million – they are almost countries in their own right.”