Coalition schemes begin summer promotions
Payback is using the Olympics as the theme for its summer “collect gold points campaign, while Nectar is running a ‘Swipe for Sun’ campaign. 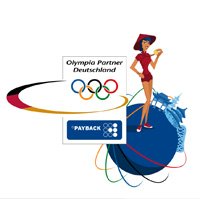 Payback an official Olympic partner, is offering to increasing points on purchases for each gold medal won by German athletes in Beijing from 8 to 24 August.

Payback says this is the biggest points offer the company has ever made.Registration to collect gold points is now available on the Internet at www.payback.de/olympia. A medal table, updated daily, will be available in the BILD newspaper and on the Payback Olympic page during the campaign. It will show customers how many extra points they can collect. Carrying on the Olympics theme, all sorts of topics covered by the Olympic bonus programme are brought together on the internet at www.payback.de/olympia. Visitors can win great prizes, including trips to Beijing.

If a Payback member manages to crack the fortune cookie that comes with each  reward, they have the chance of winning a dream house, luxury cruise or one of 300,000  instant prizes.

Other features of the website include a “Fortune cookie generator” on which Chinese and your own wise sayings can be sent by e-mail. A Chinese course (“Collecting points is great!” or “One Payback sweet and sour!” in the original) and interesting short films on the competition venues are also available here for Olympic fans. Payback has been a highly committed Olympic partner for the last five years and supported the German Olympic teams in Athens in 2004 and in Turin in 2006.

Germany’s largest bonus programme has once again come up with a charity campaign  in aid of Deutsche Sporthilfe (German Sports Aid) for the games in Beijing.

This time, points are being collected for Deutsche Sporthilfe through a modified ping pong game, “Gold pong”, including at the German headquarters (das Deutsche Haus) in Beijing.

In the UK, the Nectar coalition loyalty programme has begun its “Swipe for Sun” main promotion for 2008. Every day during July 2008, Nectar cardholders are being given the chance to win a holiday when they use their Nectar card at a range of high street sponsors, including Sainsbury’s, BP, and online at Nectar’s eStores loyalty shopping portal.

Prize draw
Nectar cardholders are automatically entered into a prize draw every time they swipe or use their Nectar card during the Olympics promotional period. There is no limit on entries, and the more members use their cards, the more chances they earn to win the grand prize. There is also the option to enter the sweepstake online via a ‘virtual swipe’ at the summer campaign’s micro site.

Winners are then able to choose from ten different holiday packages to the Mediterranean, or to destinations such as Croatia, Italy, Spain and Greece.

Celebrity endorsement
Targeting the Nectar programme’s 18 million cardholders, support for the Swipe for Sun campaign includes radio, press, digital, and TV promotions, including the brand’s first ever celebrity association. Nectar enlisted six foot one inch Penny Lancaster Stewart – probably most famous for having married the diminutive Rod Stewart – who carried out a series of press interviews to help drive consumer awareness of the campaign.