LoginSearch
You are here: Home / Features / Brands / Cobra – The Making of a Cult Beer

Cobra – The Making of a Cult Beer
If you dream of managing to impress your cynical, over worked colleagues, then we might have the answer. Get Simon Edwards, marketing director of Cobra Beer to phone. 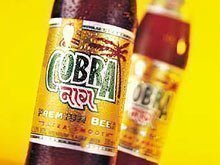 When he returned my call recently, at the Loyalty Magazine office, the blokes in the room reacted with something resembling veneration.

“Why is someone from Cobra Beer ringing you?” was the response. I couldn’t have done better if David Beckham had been on the other end of the line.

And the reason for this interest? Because Cobra beer is cool, virtually a cult product, that goes beautifully with Indian meals and most other things come to that, and it differentiates the user as having taste and being product knowledgeable.

So I was able to reassure Simon, that the fact that they haven’t actually got a loyalty scheme, wouldn’t mean they would have nothing relevant to say at the September Loyalty World conference, where Simon and COO and FD Dynshaw Italia are due to speak.

With 150 beers for sale in the UK, establishing a new one was something of a challenge.

To do this with an Indian beer is nothing short of astonishing.

The story of Cobra beer is a short tale. It began in 1990 with Cambridge law graduate and chartered accountant Karan Bilimoria. Dissatisfied with UK lagers, which he found either two heavy or too gassy or both, he went back to India with a crate of different beers he liked elements of, in order to get a beer brewed how he liked it.

The result became Cobra, described as “a crafted beer, which has a very carefully considered detailed brewing process, resulting in a beautifully drinking product, with taste and flavour.”

The challenge was to establish this new beer in a crowded and highly competitive marketplace, with little marketing budget, and no experience of the drinks trade.

Not wishing to steal Simon’s thunder, I will leave the detail for the conference, but I couldn’t resist asking him how the company is working to maintain the presence it has achieved, especially as the Carlsbergs and Budweisers of this world must now be taking Cobra seriously and working to oust it from its niche spot.

“We do a lot of research in order to maintain quality, but in terms of loyalty, we need to work at this at brand level,” said Simon. “Karan is a champion for entrepreneurs and lectures on how important it is to have innovation, and an inspired brand. He is an important figure head for us.”

Regardless of how much consumers love the beer, if the supermarkets and the restaurants won’t stock it, the brand won’t strengthen its appeal, which makes of the loyalty building for Cobra a strong B2B issue.

Said Simon: “Some competitors are more aggressive than others, and although we don’t run a reward scheme, we do promotions with restaurants and offer better prices. With the supermarkets however, this is more price dominated.

Except that for the consumer, price isn’t always everything. If awareness is high and consumers demand a product, then supermarkets will stock it, even if other beers are cheaper.

The biggest competitor for Cobra in its restaurant business is definitely Carlsberg, which has a 25-year head start in establishing its market place, but there are 6,000 outlets stocking Cobra now, which is certainly an achievement.

Cobra is also beginning to increase its marketing spend and has sponsored two films.

Simon says that often at a trade show, an older person will tell them that they used to drink Cobra when they served in India. Of course they didn’t, because the beer is only 15 years old, but there is obviously something about the label, the name or the taste that makes it taste as though they did.

To be a young person’s cult product and at the same time a beer to bring back memories in my book makes this qualify as a loyalty story, rewards or no rewards.