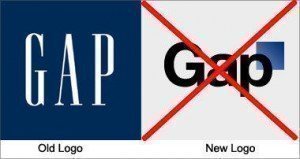 Clothes retailer Gap has scrapped its new logo just one week after its introduction following an “outpouring of comments” online.
In yet another example of the growing power of online forums and social networks, GAP’s US president of brand Mark Hansen said the company’s customers always came first so he was reinstating the old familiar logo.
So why Mark, didn’t you ask us what we thought about your logo first before taking this unreasonable step. Whose company is it anyway? Don’t you believe in customer focus groups?

Are you new in your job and desperate to make an impact or is GAP struggling in the market place calling for a “new look?”
All of this is irrelevant. We, your customers (or at least the bolshy ones who post messages on internet forums) demand to be told in future before you do ANYTHING to change the way your company looks, although of course we will complain if you stay samey and old fashioned. You have to excite us constantly while not making us feel uncomfortable.

Customers basically Mark, don’t like change, so leave your GAP logo and the Kellogs cockerel alone and go tinker with the letterheading. On the other hand, your menswear could do with a revamp and the legs of your ladies jeans are too tight.
It is no use arguing that we jump at the chance of change when it comes to swapping phones, moving to an iPad or throwing out last year’s perfectly functionable clothes. This is different.

Your 20 year old logo reminds us of our youth, so to stop us feeling old, it has to stay put.

Commenting on the Gap
And some comment from brand guru Simon Middleton, the author of the business best seller ‘Build a Brand in 30 Days’.
“I can’t think of a climb down this public and significant in the brand field since British Airways changed its tailfins back to Union Jack.”

“A logo isn’t the brand itself – that is the complete set of meanings people carry in their heads for a product or service – but it is the badge which triggers an emotional or memory response,” explained Middleton, who has advised British Airways, Barclays, Aviva, Prêt A Manger and The Broads National Park on branding.

“The Nike swoosh is so strong that we don’t need to see the name to have the meanings of Nike triggered. The shape of a Coke bottle is enough to represent that brand.”

“The existing GAP logo isn’t the best in the world… and it probably does need developing. But the way GAP went about it was incredibly ill thought through and of a poor standard. The new (dumped) one wasn’t really a logo at all,” he said.

Realising early last week that the new logo was bombing badly the brand went crowd-sourcing and asked their customers to submit their ideas for an alternative new logo.

“This was intended to look collaborative and customer-centric,” said Mr Middleton. “But it actually looked cheap and led to a bigger backlash, not least from the design community.