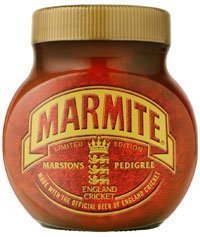 Cricket ball jar from Marmite
Love it or hate it Marmite has launched another limited-edition version of its savoury spread.

This time the jar is designed to look like a cricket ball to celebrate the upcoming Ashes series against Australia.

The new version, which will be on shelves from June 8, contains yeast extract from Marston’s Pedigree, the official beer of England Cricket. Half a million jars will be produced.

This is not the first time Unilever’s Marmite has produced limited editions of its salty, yeast extract spread. Last year it produced Lover’s Marmite, a champagne-flavoured version for Valentine’s Day, and in 2007 it launched Guinness Marmite to celebrate St Patrick’s Day.

Matt Burgess, marketing director for Marmite at Unilever UK, said: “The limited edition Marmite formats are a great way of getting consumers to trade up and increase frequency of purchase which in turn adds value and loyalty to the brand.

“The marketing support behind Marston’s Pedigree Marmite has been designed to link cricket with our British brand personality and we believe this will help the product become as successful as previous limited editions of Marmite yeast extract.”

The 250g limited edition jars will cost £3.49, one pound more than a standard jar of the same size.