Customer loyalty key in our multichannel world
No-one should be terribly surprised by the main trends coming out of this year’s World Retail Congress currently running in Berlin.

While discussion of how retailers are going to cope with a multi-channel world and the change being caused by mobile and social networking was widespread, there was also acceptance of the need for customer loyalty and data analytics.
While this should all be taken as read, the comment by Bloomingdale’s chief that the only thing you can get in Bloomingdales 59th Street New York flagship that you couldn’t get elsewhere within 10 blocks was its people is what should concentrate the minds.

We are living in a world where accessibility and speed of purchase are key; where prices can be compared in seconds and where most things can be bought cheaper online.

If High Street retailers are to avoid becoming simply the shop window for the internet, some serious thought needs to go into how they are going to keep the loyalty of their customers.

In Australia, for example, retailers have woken up to the fact they can no longer stay comfortably a season behind their Northern Hemisphere counterparts for fashion items.

Shopping centre developers must make more use of technology and the internet to engage with consumers if they want to remain relevant to a new generation of shoppers, delegates at the congress were told.

Architect Eric Kuhne, who created the Bluewater shopping centre in the southeast of England, is working on the creation of a “third, virtual floor” for the two-storey mall, which would create an online community of about 180 retailers not physically present in Bluewater.

Kuhne said those retailers taking part would then be given the first option to take physical space in the mall as it became available, he said.

Ronan Faherty, commercial director of Land Securities, which opens its One New Change shopping centre in the City of London this week, said that as a developer/landlord, Land Securities was increasingly focusing on how it might embrace and use social networking and other advances.

Faherty said Land Securities has used Facebook as part of its marketing campaign for its new scheme in Leeds and has achieved very positive local consumer engagement.

“We are looking at the complete customer journey” he said. “Public realm in our centres is becoming incredibly important. Once you create the right environment for people, then you get dwell.”

Catering for the world shopper
With the internet making the world more accessible to shoppers, and inexpensive international travel is making it easier for us to visit other lands, it is increasingly important to consider other markets. 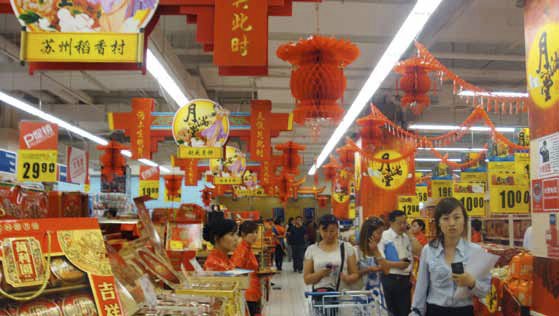 Kingfisher chief executive Ian Cheshire said that now the Western debt bubble has burst we should expect to see a three-speed world develop, with countries including China leading growth, the US and Germany running at a middle speed, and the rest of Western Europe experiencing slower growth.

For Landmark International chief executive Renuka Jagtiani this has meant reassessing the potential of luxury in the Middle East. Though it’s a growing market again, she does not believe that the estimates of the potential market size given during the boom years will hold true.

In India, the young demographic is quickly getting access to the internet – but on smart phones rather than PCs, which will impact how ecommerce and multichannel retail develops there.

In Brazil, the growing group of middle class customers are quickly adopting the same desires as those in much more economically mature countries. It ranks second after the UK in terms of the willingness of customers to adopt multichannel, digital and global retail.

In the parochial US, both fashion-conscious and more mainstream consumers are much more heavily influenced by domestic brands than international ones.

In China, though the total population exceeds 1.3 billion, the middle classes with purchasing power represent only 200 million. To unlock their disposable income they will have to be persuaded to reduce their saving rate as a percentage of income from the 32% that it currently stands at.

While WPP The Store chief executive David Roth described it as the most price-competitive market in the world, it is also one where labels count: “The notion of status and brand are important to fuel Chinese consumption.”
So is it possible any more for a retailer to expert any form of loyalty from its customers?

The biggest danger as always, is complacency.

Ian Cheshire of Kingfisher said that his company gains enormous advantage from the data it has on customers, but it needs analytics to leverage it.

Innovation and differentiation – including the development of own label products – help Cheshire’s business to fight back against commoditization and search engine comparison sites.

Customers can be pulled in to a brand by persuading them to play a part in the development of products, services and retail concepts. “We have been the editor of choice. But we are about to see a more collaborative process emerge,” he said.

Target Australia chief executive Launa Inman, the growth of information available is both a challenge and an opportunity. innovation has allowed her to create a highly successful loyalty programme and benefit from the insight created from the data it generates. For instance, the business was able to prove that heavy discounting on Diapers (nappies) was not driving add-on sales. “Loyalty data has broken that myth,” she said.

Brand trust can lead sustainability
There was also the strong suggestion at the Congress that retailers should leverage the strong trust that consumers have for their brands to lead and promote greater sustainability. The inference was that not only would the ecology benefit, but that customer loyalty would be enhanced also.

Based on a study of 30,000 people across nine markets, retailers came out among the highest-ranked companies in terms of how consumers perceived their environmental and CSR strategies, said Sara Dios, director of global insights at Havas Media.

Among those most highly ranked were Spanish supermarket chain Mercadona, Home Depot, Sainsbury’s, Ikea and Tesco. Indeed, all of the top five most trusted companies in the UK were retailers, said Dios.

“Retailers have the opportunity to really shape consumer behaviour,” she said. “They also have the chance to build genuine social capital from their initiatives.”

Sarita Nayyar, senior director and head of consumer industries, World Economic Forum, added that for businesses it was no longer enough to have CSR issues handled as a separate element of the overall business. “That is a very outdated model,” she stressed. “Now the imperative really needs to come from the CEO’s office and it must be fully integrated with the company’s strategy.”

She cited companies such as Nike, which operates a collaborative ideas forum called Green Exchange, as an example of a business that has embraced sustainability and has been prepared to share intellectual property in order to promote best practice.

And the winner was….
The retailer of the year award went to online player Amazon, which was an overwhelmingly popular choice with the Grand Jury judging panel.

After another year of unqualified success, Amazon continues to pursue its strategy of offering a wide range of merchandise at low prices in order to drive market share.

Sales in its international segment are likely to continue to outpace home revenues and it is also looking at new markets.

Amazon also introduced new categories, including online grocery delivery to its services and continues to innovate across its business.

The judges were impressed with the “sheer scope of Amazon’s innovation” and also pointed to its massive success in areas such as the Kindle e-book reader, with an operation described simply as “quite formidable”.

Major markets for Amazon include its home market the US, the UK, Germany, France, Japan and Canada.

Profits and turnover both increased by about 30% in the year to April 2010.