LoginSearch
You are here: Home / News / easyJet and the battle of the bags 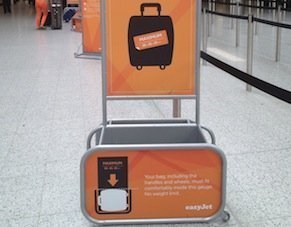 Flying back from the excellent Brand Loyalty conference in Amsterdam this week, I was bemoaning easyJet’s recent reduction in on-flight baggage size, its discrimination against women who want to carry a handbag as well as a carry on bag, and its new policy of charging if you want to choose your seat – to anyone that was listening, writes Annich McIntosh.

“Ah”, said the more frequent easyJet traveller sitting next to me, but that is only for those who are not easyJet PLUS customers.

As this news came as I was browsing the latest report from Deloitte that suggests loyalty programmes are not doing their job (though the consultancy would be happy to point out to airlines how they can put this right), and I wanted to explore my next door neighbour’s smugness and satisfaction with his loyalty programme status a little further. This is what he told me.

If you spend the hundred and fifty odd quid it takes to become an easyJet loyalty programme card carrying member, life gets a great deal easier. You can book your seat for a start, you get priority boarding, which these days just means you don’t have to wait for hours usually on the stairs, to board at the back of the plane. And then there is the baggage. Low cost airline easyJet wants to speed boarding, and so it makes sense to incentivise customers not to take large bags that have to go in the hold. They do this by charging often more for the bag than for the seat.

On the other hand, there is limited space in the overhead lockers. So the airline stipulates a very small bag size – for those who are not loyalty programme members. My interest was engaged especially as the aforementioned bag size stipulation had let to a hilarious incident while we were waiting to board where a business traveller was arguing that his bag was small enough to qualify as carry on luggage. The check in attendant begged to differ, and there followed a scene that could have come from Monty Python, with the would be passenger stamping on his bag with his very nice brown leather Italian brogues, to force the bag into the measuring container. It finally went in, but then of course, he couldn’t get it back out. The queue of non-loyalty programme travellers watched with a mixture of horror and delight at someone else’s misfortune as the passenger then had to climb on top of the now dangerously wobbling bag measuring device to haul and heave his bag back out.

The argument of course continued, with the check in women reasonably arguing that forcing a bag into the device didn’t count, and the passenger equally reasonably arguing that as it went in, they had to accept it, as no-where in the rules does it say ‘no force allowed’ or ‘stamping on the bag from a great height doesn’t count either’.

Finally the easyJet women relented and he, and the majority of the other passengers, were allowed on the plane.

This wasn’t the end of the story however. The remaining passengers came on in drips and drabs, many without luggage, all looking stressed and angry. Some downright furious. Clearly the measuring scenario had happened several more times.

A contest began among the nearest passengers to guess whether or not each passenger had had to pay extra for their bag, or whether they were just late.

When the doors finally closed, the flight attendants gave a special welcome to easyJet PLUS passengers. My next door neighbour looked even more smug. “It is definitely worth signing up if you fly regularly, he said. It just makes life so much easier.”

For infrequent, disloyal passengers like me that fly with a range of airlines, there is no easy solution to travel discomfort because the £150 needed to be spent to buy extra luggage capability isn’t economically sensible. But people like me are not the target for loyalty programmes.

Airlines aren’t trying to get the occasional traveler tied in, they want the regular business travellers that make up the majority of their revenue. And for them, even easyJet is providing some very much appreciated extra comfort.

Undoubtedly some of the airlines could revamp their loyalty schemes too. Take a look at what Deloitte has to say.

Previous Post: « Airline frequent flyer programmes not fostering loyalty, argues Deloitte
Next Post: easyJet and the battle of the bags »