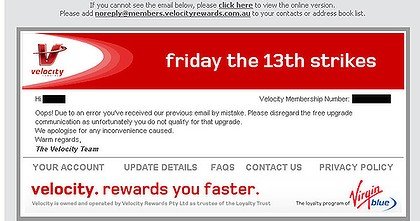 Over million members of Australian airline Virgin Blue’s Velocity Rewards scheme were sent an email offering free lounge memberships and upgrades to “gold” status. The offer was hastily withdrawn in a follow-up email two hours after the first one was sent out.

The original email, which went out on Friday November 13, went to the wrong section of the Velocity membership database.

The mistake is likely to have cost the airline millions of dollars and it has had to apologies to customers.

The error was exacerbated by the fact that many people did not receive the letter retracting the offer after it was quarantined in the spam rather than appearing in their main email inbox.

The email offer said: “We’ve got a treat for you – a free upgrade to Velocity Gold! Given you came so close to making it on your own, we wanted to say thanks so much for your ongoing commitment to the Virgin Blue Group, we really love having you around.”

Gold status includes benefits such as free lounge membership, priority check-in, up to 32 kilograms of checked baggage at no cost and personalised baggage tags among the benefits.

The follow-up email (pictured above), titled ‘Friday the 13th Strikes’, said: “Oops! Due to an error you’ve received our previous email by mistake. Please disregard the free upgrade communication as unfortunately you do not qualify for that upgrade. We apologise for any inconvenience caused. Warm regards, The Velocity Team.”

On the Velocity Twitter site members were quickly busy talking about the error. Most reacted humorously, but some angry customers said they had been considering buying tickets due to the email with others suggesting it was all part of an advertising trick.

“@VirginBlue worst mistake ever! I was about to purchase confirmed seats due to the (not so) awesome email!” one user said.

One user commented:  “Dear @virginblue please disregard the 100 flight bookings I made. I made a mistake and you don’t qualify for my business.”

It is thought unlikely that the consumer watchdog, the Australian Competition and Consumer Commission, would take any action against Virgin.