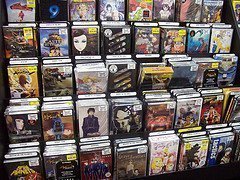 The UK company has been trialling the Pure HMV scheme since last October in 33 stores and it will launch nationwide on May 11. HMV says it is a multi-channel reward scheme that links up all its operations including high-street stores, online and live, with the aim of protecting and growing high-spending customers.

The card is differentiated from cards at other large merchants, which provide future discounts on shopping bills, and will focus on points redemption – which can be tracked online – for exclusive offers and benefits. A promotional film for the scheme includes an offer to attend the premiere of the next Harry Potter movie, while a Gibson guitar signed by former lead singer of The Jam Paul Weller was among the offers available during the trial.

HMV says the card will help its suppliers and added that figures showed that Pure card holders’ average spend is double that of other HMV customers. It is asking record labels and other producers to deliver exclusive offers to help the successful launch of the card, which will abe accompanied by a major promotional campaign.

The retailer announced a year-on-year sales increase of 11.7% in the 16 weeks to April 25 and group chief executive Simon Fox says that it will take advantage of the altered retail landscape.

Rival enetrtainment retailers such as Woolworths (which closed down at the beginning of the year), and Zavvi (which went out of business in February) have been defeated by the recession and the move of music sales to websites such as iTunes. HMV has bought 23 of the Zavvi sites.

HMV launched a three-year plan in 2008 which aimed to revitalise its stores, including opening next generation outlets, and growing its online mail order and digital businesses.

“We know we haven’t done anywhere near enough in digital,” Fox said.

HMV has a 4.5 million-customer database, including online customers and also Mama Group’s customer data, will also be used to drive concert sales through HMV’s new ticketing operation where it hopes to become a major force.