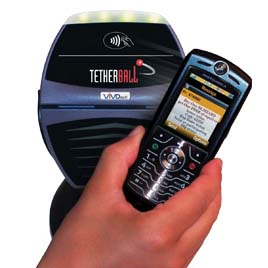 Customers signing up for the scheme receive coupons on their mobile phones via text message, then redeem the coupons using RFID (radio frequency identification) labels attached to the phones. The RFID system is being supplied by mobile marketing company Tetherball.

Dairy Queen has already been running an SMS-based coupon system from Tetherball in Indianapolis and Philadelphia since 2008. The company says 900 people have joined the SMS programme with only 6% cancelling membership.

Customers who join the SMS programme receive discount offers via text message that can be used at their local Dairy Queen. Using the system, the restaurants can offer coupons to specific customers based on past purchases, and track the success of their promotions. The discounts can be limited to certain days or times so Dairy Queen franchisees can see how much customer traffic they generate by timing the coupons.

The SMS system, however, requires customers to show their mobile phones to the cashiers to redeem their coupons, and does not provide real-time feedback on the success of the promotion.

RFID version
The RFID version of the system adds a 13.56 MHz RFID “Tetherball Tag” attached to the phone (or the customer’s wallet or purse) that authenticates the customer before redeeming the coupon. Customers joining the program provide their mobile phone number and zip code so that promotions can be targeted to the Dairy Queen closest to the customer’s home.

When customers arrive at the restaurant to cash in their coupon, they either present the RFID tag to a reader at the point of sale (using a standard contactless payment reader), or take their phones to a standalone kiosk where they can print out a paper coupon. The customer ID number is automatically transmitted to the Mobiquitous system.

Dairy Queen, based in Minneapolis, services more than 5,600 independently owned and operated Dairy Queen stores in the US, Canada and other countries. It says if the RFID tests prove successful it intends to roll the scheme out nationally.