Freedom goes live with 30,000 merchants plus Shell
Exclusive interviews with Barclaycard and Shell on how Freedom feels so far

Barclaycard went live with its new Freedom loyalty scheme today, with the pressing of a big orange button at 7.30 this morning as the www.barclaycard.co.uk/freedom website updated with full details of the scheme and its partners.

Through its Barclays Merchant Services acquiring division, Barclaycard has persuaded 30,000 small and medium sized retailers to participate in the Welcome Real-time based scheme so far. Big names such as Shell petrol stations and utility Npower are giving national range to the scheme.

To recap, the Barclaycard Freedom scheme is open to all 8 million Barclaycard cardholders in the UK who will automatically earn 1% in most participating outlets (0.5% at Shell) plus other special promotions and discounts in store at the discretion of the individual partners.

Reward Money is recorded in pounds and pence, with no vouchers or coupons to save and no points to calculate. Barclaycard cardholders will be rewarded for simply using their card to make a purchase, with no need to register or receive a new card.

Barclaycard customers making a purchase in most participating retailers will see the value of their Reward Money appear on the card machine before they enter their PIN to pay. They will then be able to redeem some or all of their Reward Money on that transaction, or continue to save up for a future purchase. 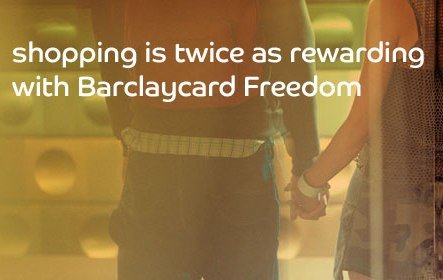 Make it simple
While the goal has been to provide a simple scheme for the consumer, behind the scenes, much midnight oil has been burned as the Freedom marketing team and the technical staff ramped up towards the March 17 launch date.

Sarah Alspach, marketing director for Barclaycard Freedom said: “We have achieved huge national coverage. We are really pleased. The technical guys have had some long nights testing everything time and time again, and it is looking good. Now we need to make sure all our cardholders are aware of the scheme so we are beginning a national television campaign this weekend, backed up by press, online, and direct marketing.”

Barclaycard Freedom will be using an online and mobile game to encourage customer visits to the site, and cardholder participation. The scheme will also be sending regular alerts through the cardholder’s channel of choice to remind them of the new special deals various retailers may be offering.

But the strongest advantage of the scheme, believes Alspach, is that customers are reminded they are earning Barclaycard Freedom points every time they read the POS till receipt.

She says that Barclaycard Freedom has been designed for people who don’t want to work hard at getting rewards. “It is rewards in pounds and pence and we will be reminding cardholders of how much they have earned every time they shop. They don’t have to worry about vouchers running out of date, or saving bits of paper. It is very simple.”

Once the scheme is functioning smoothly, Alspach views her next challenge as maximising the opportunities for cardholders to earn rewards and take advantage of the special offers.

“This will be done by communicating to them the most relevant offers and creating more of a sense of community,” says Alspach. “We have no intention of standing still. Barclaycard Freedom certainly seems to have woken up the other loyalty players in the market, but we are confident we are making loyalty simpler in general by communicating the reward balance on the till receipt. No-one else is doing that. Now we can leverage this messaging ability at the POS in other ways, such as telling the cardholder what they are eligible for in that store, so that they look for the offers that are available. The till can be a very powerful communication tool and the value is incremental.”

The big question that remains unanswered so far is whether Barclaycard will be able to persuade one of the major food retailers to participate in the scheme.

Sainsbury’s Andrew Mann told Loyalty (special interview coming soon) that it was happy with Nectar and would not be participating in the Barclaycard Freedom scheme. Tesco is committed to Clubcard, so that leaves Morrisons, Asda, the Co-op, Waitrose and of course Marks & Spencer. Each runs consumer reward projects in their own way, although the Co-op is the only other store running loyalty as a card scheme.

Alspach said: “We continue to talk to people about joining the scheme. This hasn’t ended just because we have reached March 17, our launch date. We are talking to lots of players about joining Barclaycard Freedom and will continue to do so. Now of course they can see how people are using their Barclaycards and what choices they are making.”

As Barclaycard has over 8 million cardholders, this is a very powerful message and it was a major driver for Shell to join the scheme, according to Crispin Rogers, global loyalty and B2C payments manager for Shell.

The business proposition for Shell
Rogers told Loyalty that it had been very easy to see the advantage of the Barclaycard Freedom loyalty scheme, even though Shell was running its own Shell Driver’s Club loyalty card scheme.

He explained: “We have had a great success with Shell Drivers Club, and have doubled the number of customers since its launch in May 2007 which is a great achievement. We have been running a loyalty scheme in the UK for 20 years, and have loyalty schemes in 21 other countries. Shell understands the business case. To be offered a potential 8 million Barclaycard customers through the Freedom scheme was an exciting proposition.”

Shell will be continuing with its Shell Driver’s Club programme, through which it offers a point per litre of petrol bought, and will be offering 0.5% reward on value spent through Barclaycard Freedom. The Freedom reward will be applicable to all purchases at Shell forecourts, including food and household goods.

Crispin is not worried that this will prove unsustainable: “We really do have massive experience of loyalty schemes and we are sure that the incremental value add will be greater than the spend.”

But is he worried that offering what in effect is a double reward will lead to a dangerous price and rewards battle with other petrol retailers and the supermarkets, especially as Shell is offering an additional special offer to Freedom cardholders of 5% of spend on their third visit?

Crispin said: “This is already a highly competitive business and we are used to competing with the supermarkets which cross subsidise their petrol with 5% off vouchers. Shell maintains the lowest price in fuel, even compared to the supermarkets, and in addition Drivers Club has been giving customers a bit more, but it has paid for itself in driving new customers our way. The principle works.”

The Shell Drivers’ Club is a massive benefit to Shell in terms of providing customer insight and intelligence. This part of the business is handled by dunnhumby.

Crispin said: “Now through the Barclaycard Freedom scheme, we will be able to drive even more customers to our forecourts. We are confident that this hugely broad based scheme will be beneficial for us. We have demonstrated already that we can change customer habits with the right incentive. Loyalty is a very powerful tool.”

Coming soon
Shell runs loyalty schemes in 22 countries, including 5 coalition schemes. It has 19 credit card loyalty schemes. Loyalty will be publishing case studies from some of these schemes plus a more in depth report of the interview with Crispin Rogers.