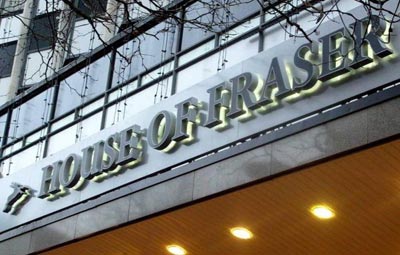 The upmarket department store chain joins over 20,000 retailers nationwide offering Reward Money on purchases that can be spent at participating retailers.

However, until 2011 customers will only be able to earn Reward Money at House of Fraser stores across the UK not spend it there.

Barclaycard says that “as soon as the technology is upgraded” customers will be able to spend Reward Money in House of Fraser stores.

Until then Freedom cardholders will be able to earn Reward Money at the 60 House of Fraser department stores across the UK, and online at www.houseoffraser.co.uk

Sarah Alspach, marketing director of Barclaycard Freedom commented: “Adding a department store to our coalition is a significant step in the growth ambitions we have for Barclaycard Freedom, expanding the range of products customers can spend and earn reward money on.”

Partners
Freedom’s major retail partners include Shell and PizzaExpress, though it has yet to partner with a major supermarket chain. Rival coalition scheme Nectar is partnered with Sainsbury’s while Tesco issues the Clubcard

Maureen Dunlop, head of CRM for House of Fraser said: “Barclaycard Freedom offers immediate and tangible rewards to cardholders. We’re delighted to offer this to our customers in time for the busy weeks leading up to Christmas”.

Since the Freedom scheme’s launch in March this year, other retailers and brands that have signed up to offer Reward Money include Goldsmiths, Mappin & Webb, Watches of Switzerland, Shell, LA fitness and PizzaExpress, and a range of smaller retailers.

Barclaycard customers making a purchase in most participating retailers will see their current Reward Money balance appear on the card termminal before they enter their PIN to pay. They can then choose to redeem some or all of that balance on the spot, or continue to save up toward a future purchase.

Eligible Barclaycard holders will be rewarded for just using their card to make a purchase, and do not need to register or receive a new card.