Credit card cashback and loyalty point rewards are being cut back across Europe in response to the EU interchange fee cap.

The cutbacks have been coming both prior to and since the cap of 0.2% on debit cards and 0.3% on credit cards came into effect across the EU from this month.

Germany has been particularly affected by the credit card cap due to its historically high interchange rates – 1.58% on Visa credit cards and 1.73% for MasterCard.

Consorsbank has introduced a new 1.75% fee for use of its Visa credit card outside Germany, having previously charged nothing.

From 1 January 2016, the award miles on the Lufthansa Miles & More card will be be heavily cut for private use. Instead of Eur1 per 1 mile, Eur2  will need to be spent to earn 1 mile in most cases.

The foreign usage fee for all Miles & More credit cards is also being increased from 1.25% to 1.75% in January.

UK
In the UK most of the major issuers have cut or are about to cut their cashback and loyalty point offerings on credit cards.

Capital One was the first to break ranks in June, informing customers that it would be reducing or completely eliminating cashback rewards across its credit card portfolio.

Similar moves from RBS/NatWest, Sainsbury’s Bank and Tesco Bank have followed, and Santander will increase card fees for all customers and reduce cashback rewards for new customers.

Referring to the interchange fee cap, a Santander spokesman said:” All MasterCard and Visa card issuers are facing the same pressures.”

Sweden
British Airways is cutting the Avios points offer on its credit card in Sweden and bringing in an annual fee of SEK395 (£32). In Germany the airline is scrapping its Avios rewards credit card offering completely from this month and replacing it with a ‘no benefits’ card.

Third party schemes
The only card firms exempt from the interchange rule are ‘third party’ card schemes such as American Express, which operates a three-party model where it deals directly with merchants, and also third-party card schemes that licence other parties to issue cards, for example Amex licences MBNA and other providers to issue its cards, provided they have a market share of less than 3%.

Amex is exempt from the interchange ruling for the next three years, and Aite Group analyst Andrew Copeman says the difference between rewards offered via Visa/MasterCard and Amex products is illustrated by Lloyds, which offers both MasterCard and Amex versions of its ‘Choice Rewards’ card. This gives customers 10 Choice points for every £1 spent on the Amex card, but only 10 points for every £5 spent on the MasterCard.

Changing rewards model
Copeman says that the interchange caps are changing the type of rewards that are on offer, with new perks increasingly focused around tactical offers such as short term promotions of 1 to 3 months from participating retailers.

Rather than focus on interchange rates through credit card rewards programmes, Aite Group says that European banks are looking at merchant-funded offers and coalition loyalty schemes. Allowing consumers to opt in to loyalty programmes, as opposed to automatic enrollment, will be an interesting contrast to follow in how they engage with their financial institution. 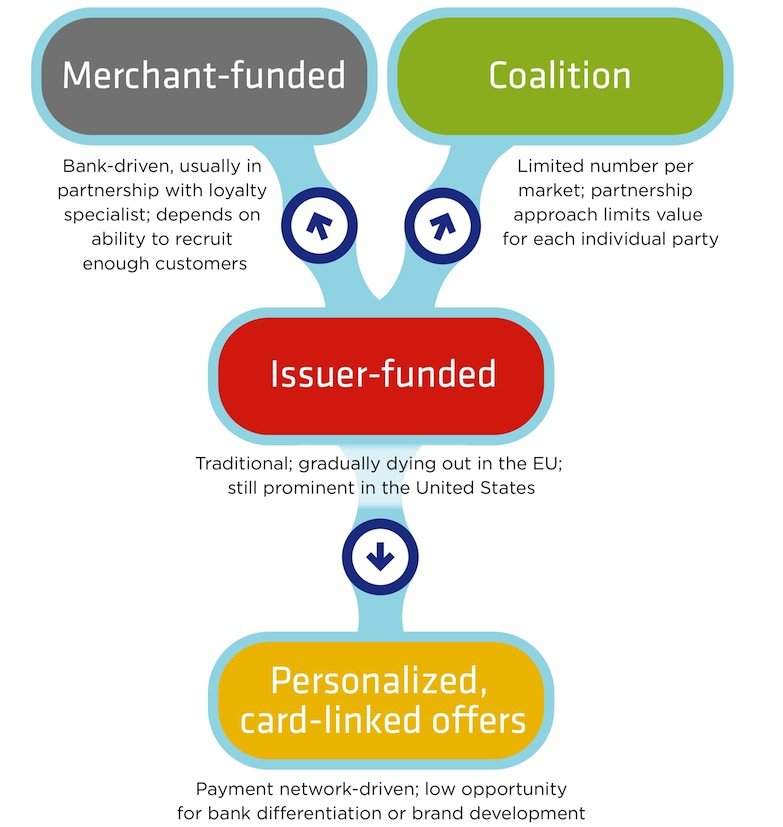 “The emphasis is on tying up with merchants that might be of interest to cardholders, rather than blanket deals across the entire portfolio as in the past,” says Copeman. “I think today’s loyalty offers are more of an opt-in item for cardholders, and indeed there is a segment of customers who just are not bothered.”

He adds that banks are now thinking differently about loyalty with the Barclays Blue Rewards programme being a good example. Customers get discounts on bank services, rather than in the wider market (although there are some retailer promotions also available).

“Elsewhere the approach is currently toward card linked offers, either negotiated via a scheme like Visa, or by banks themselves approaching retailers,” says Copeman. “The retailer seems happy to give discounts if it can have a more tailored approach, even if it is of a shorter duration.”

The interchange cuts are having an effect on the industry beyond card rewards. In November, Aimia – which runs the Aeroplan scheme in Canada and other customer loyalty programess around the world including the UK’s Nectar – announced it would lay off 200 employees by the end of this year, with more job cuts possible in 2016.

Aeroplan chief executive Rupert Duchesne said: “We knew that 2015 would be challenging, due to, most significantly, the effects of interchange rate negotiations and the slowing economy.”