Mail inserts reach young consumers as well as old
Nearly one-fifth of people in the UK have taken action on special offers included with statements they received, according to new figures. 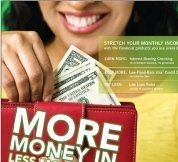 A new survey from data solutions provider Lloyd James Group found that it is not just older consumers who respond to special offers enclosed in bank, credit card or loyalty programme statements, but that digital-savvy younger consumers are very responsive too.

The survey of 2,000 UK adults found that, overall, 18% of all UK consumers said they had responded to a special offer enclosed in one of their regular statements in the last 12 months. Targeted inserts were almost equally successful among both genders, with 19% of men and 17% of women saying that an insert had compelled them to respond. The survey sample was representative of the UK by age, gender, region and social class.

The research showed that consumers under 45 are keen to take action on offers received though inserts, indicating that multi-channel marketing programmes using digital and other media work well when they include mailed inserts. The research found that roughly 30% of consumers under 45 had responded to an insert in the past year.

The study also revealed that the people who are most likely to respond to inserts live in the North East, Central Scotland, Yorkshire, London and the Midlands, while consumers in Wales, the South West and the East of England responded to inserts less frequently.

Lloyd James’ survey is particularly significant in light of recent findings about the success of traditional direct marketing in driving people to commercial websites. A recent study by Pitney Bowes found that 60% of consumers were most likely to visit a company website with a first-time purchase in mind if a piece of direct mail, or an insert, or a direct response advertisement pointed them to it. The impact of offline communications outweighed that of digital media, as only 24% of consumers stated that an email, sponsored weblink or other type of online ad would get them to go to a company website.

Lynn Stevens, MD of Lloyd James Group, commented: “The opportunity for businesses to include inserts with their statements really exploded after postal deregulation took place in 2006. With the weight allowed for standard letters increasing to 100 grams from just 60, savvy marketers saw the opportunity to both promote their own activities and to sell that space to other businesses.

“The space for special offer inserts in bank, credit card or loyalty statements is there for the taking. It gives a company the room to provide an informative creative piece of communication that hits consumers when they have the time to take it in. A well-targeted insert has the potential to really motivate a consumer and help the advertiser to build a strong relationship from a good starting point.“

Stevens added that, contrary to the belief that only older, web-shy consumers are interested in direct mail, the survey found that traditional mail shots can drive consumers of all ages to the web. It is in fact the digital generation that has a multi-channel mindset, as younger consumers clearly respond to all media.

“Taking advantage of all communication channels and seizing the chance to increase brand loyalty are essential considerations in our multi-channel environment,“ said Stevens. “Companies seeking to drive additional business shouldn’t miss out on the opportunity that inserts present.”