LoginSearch
You are here: Home / Features / Retail Loyalty / Making use of the pop up concept

Making use of the pop up concept
Pop up stores have become something of a high street phenomenon. Originally the domain of seasonal traders and craft sellers, they are increasingly being used to test products and marketing initiatives, and even to act as collection points. Chris Gates, director of retail at Hitachi Consulting UK explores the concept of the pop up. 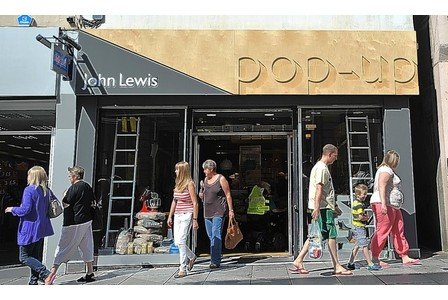 If new products can come and go, then why can’t the stores that display them do the same?

It has been reported that one in six premises now stands empty across the UK, compared with just one in twenty before the start of the recession. With more empty spaces on the high street than ever before, many retailers are taking advantage of the opportunity to increase brand awareness and test new products or services by opening pop-up shops.

A pop-up shop is the short term let of a property by a retailer in a good or unusual location for a nominal rent. Pop up shops can enable retailers to trade in new markets during key selling periods – such as Christmas – and take advantage of an increased footfall, without the large costs associated with a permanent presence of a high street store.

As the name suggests, these initiatives generally have a tendency to ‘pop up’ unannounced. They quickly draw in the crowds, and then disappear or morph into something else. Most importantly, they allow the retailer to target exiting and new customers in a fresh and innovative way, while maintaining an element of surprise.

Toys R Us
Two recent pop ups in the UK have stood out particularly. Toys R Us opened a pop up in Whiteleys (Bayswater) to capitalise on the gap left by the Early Learning Centre during the Christmas toy selling period and John Lewis opened up a pop up in Exeter, ahead of their new department store opening. Both drew in massive crowds, generated positive brand recognition and increased the retailers’ venues.

Pop ups don’t just benefit those existing high street retailers looking to set up elsewhere. In fact, a pop up store can create a new and unique shop front for a brand that has only had internet or catalogue presence in the past, as we have seen with the Amazon trial in recent months. As such, the customers are able to connect to the outlet in person and provide a physical presence to something that had in the past only been viewed though a computer screen. In addition, pop ups can create new destinations for click & collect services, which are becoming increasingly popular for consumers.

In terms of setting up a pop up shop, the retailer will either use a team from an existing store, or recruit specifically for that pop-up. Either way, they will need to make sure that they have experienced staff on the ground, who know the products, understand the store layout and can bring the brand to life in that new location.

Generally the retailer will deploy standard EPOS and store systems in the pop up. They may even introduce internet ordering kiosks or devices, so that the consumer can attend the pop up in person, yet order the product online and get it delivered at a more convenient time. Not only can this help the consumer on their multichannel retail journey, but it is also a great way for the retailer to engage with the consumer after the pop up visit and track their data.

Recent research by Hitachi Consulting revealed that even if a product is ranged to store at a price the consumers are willing to pay, 86% of customers will walk out if either the product is not in stock and needs to be ordered in, if the customer service is poor, or even if they have had a previous bad experience within the store.

Speed
Generally pop up stores can be deployed very quickly. Exeter’s John Lewis pop up, for instance, only took eleven weeks to open and as such the retailer can start reaping the benefits quickly. Here John Lewis took a creative approach to visual merchandising, using fittings and signage that looked intentionally temporary, so minimising sunk cost and time. Planning is just as important as in a normal store opening – however, there is the potential to have more of a trial approach, and to allow the teams to use their creativity. Key though is establishing what your objectives are for the pop-up, and making sure all involved are aligned behind them. Is it brand awareness, revenue, profit, or simply connecting with new customers?

Certainly, pop-up shops can provide a retailer with a very wide range of benefits and market opportunities, without the burden of having to enter into a long term property commitment. Set up properly the format works very well.