New rankings for “e-readiness” show digital priorities of world’s economies
With e-loyalty of such vital importance to modern economies, we take a look at which countries have the most (and least) advanced digital economies

Sweden is top of the list and Azerbaijan is bottom. In between are placed the 68 other economies in the Economist Intelligence Unit’s annual benchmarking study called the “digital economy rankings” of e-readiness.

The Economist Intelligence Unit says the study’s new title reflects the gradual shift of countries’ digital priorities from simply making technology available to the population to maximising its use for economic and social benefit.

To make better use of the rich applications and services now available, people’s access to the Internet and telecoms networks must be of increasingly high quality. For this reason, the rankings model now assesses the quality of countries’ broadband and mobile access (based on existing fibre and 3G connections), in addition to their prevalence. This addition has affected the fortunes of the top-ranked countries: several in Europe and North America suffered a decline in their scores—and some a fall in the table—as their high-speed networks are in need of further development. Asian countries which have invested heavily in next-generation networks, on the other hand, moved up the table (see below).

However, according to Denis McCauley, the Economist Intelligence Unit’s Director of Global Technology Research, “Strong digital development requires concerted action and progress across many fronts.” This year’s leader, Sweden, and most of the other top-tier countries boast, along with high degrees of connectivity, stable business and legal environments; strong educational and cultural drivers; supportive government ICT policies; and, partly as a result of all the forgoing, active and growing use of digital services by individuals and businesses.

Since 2000, the Economist Intelligence Unit has published this annual digital ranking of the world’s largest economies, using a model developed in co-operation with the IBM Institute for Business Value.

The above and other key findings of this year’s study are highlighted below:

§ Nordic countries excel in most digital economy areas. Sweden dislodged this year the perennial “e-readiness” leader, Denmark, albeit by a narrow margin. Finland and Norway are also among the top six digital economy countries in 2010, the former advancing six places mainly on the strength of improved performance in indicators measuring the use of online services.

§ Asia’s digital leaders outperform the rest on quality. Taiwan, South Korea and Japan all advanced strongly in the rankings, partly thanks to high scores—relative to the rest of the world—in broadband and mobile “quality”. Their high fibre density, for one, is testament to these countries’ ability to execute on their digital agendas.

§ Broadband is becoming more affordable across the globe. In 49 of the 70 countries in the rankings, the monthly fee charged by the main broadband provider amounted to less than 2% of median monthly household income in 2009. This was the case in 42 of the 70 countries in our 2009 study, and only 33 countries in 2008. Affordability has advanced strongly in developing countries such as Vietnam and Nigeria.

§ There is more evidence that the digital divide is narrowing. Where 5.9 points (on a 1-10 scale) separated the top-ranked country from that of the bottom ranked in 2009, the gap narrowed to 5.5 points in this year’s study. This is partly due to the above-cited model changes which, in “raising the bar”, have had a larger dampening effect on the scores of top-tier countries than on those further down. As in the case of broadband affordability, however, lower tier countries are making up ground in a number of areas. 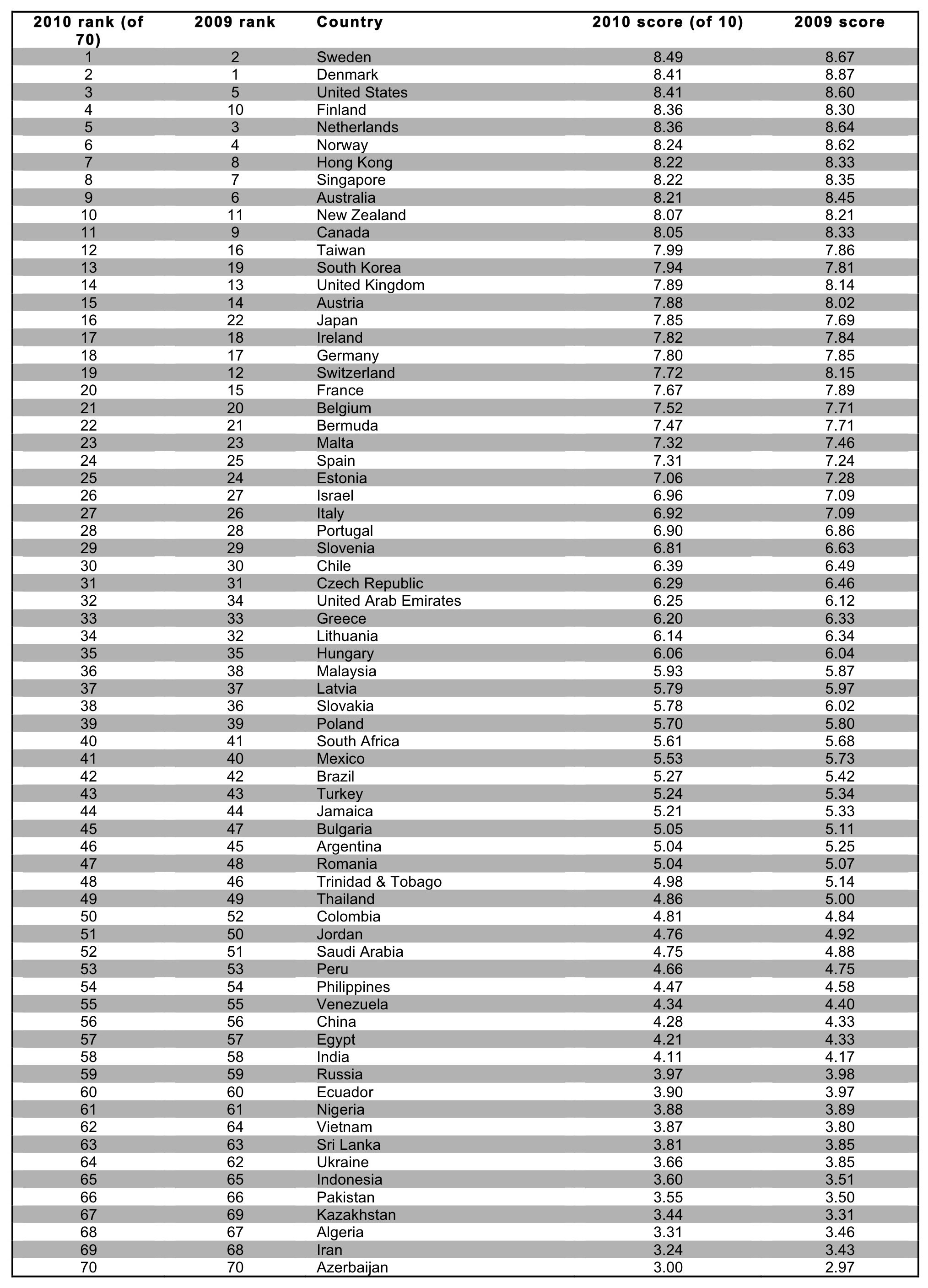 Previous Post: « Disintermediation of services through the internet is a real danger
Next Post: BP attempts to improve image with points offer »