New research shows the most buoyant markets for retailer cards
Brazil tops the charts for the highest number of retailers with their own payments card. The most significant potential exists to develop retailer payment cards in India, Russia and Vietnam.


These were some of the finding from a massive recent research project from Finaccord which surveyed 6,280 prominent retail brands in 65 countries. Of these retail names, 1,945 were found to offer their own payment card, thereby producing a global penetration rate of 31.0%. 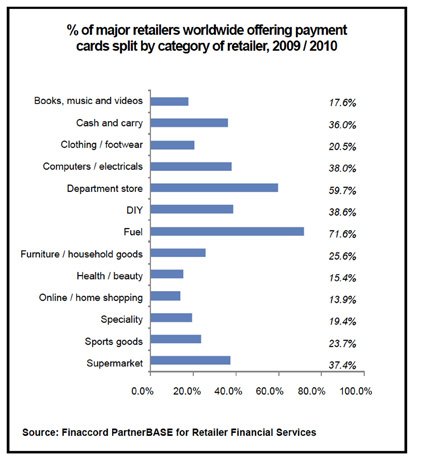 While the Americas were the most active in launching payment cards, Brazil had the highest number of retailers (76.5%) with their own payment card.

This is followed by 70.3% in Canada and 57.9% in Peru, with Portugal, in fourth place with an equivalent data point of 56.6%, the most developed European market by this measure.

Countries in either North or Latin America make up eight of those in the top 15 with European countries only featuring twice. In addition to Portugal, only Spain appears in this ranking with a penetration rate of 42.5%.

At the other end of the scale, the lowest corresponding figures were recorded for Kuwait and Qatar, in which no retailer payment cards were identified whatsoever, followed by Bahrain (1.9%) and Saudi Arabia (2.3%). Indeed, retailer payment cards are thin on the ground in the Middle East generally although retailer loyalty cards with no payment function are more in evidence.

The countries in which comparatively few major retailers have introduced their own co-branded or store cards are generally those in which the payment card market as a whole is under-developed. In this category would fall India, Russia and Vietnam

Turkey is a slightly different case because of the number of bank-owned coalition loyalty programs, around which payment cards have been developed and to which major retailers normally affiliate themselves. This makes it difficult to make a business case for retailers developing their own payment cards.

Fuel highest sector
Fuel retailers and department stores are the merchants most likely to have launched payment cards.

With respect to the penetration of co-branded and store cards by category of retailer, Finaccord’s research shows that worldwide, cards achieve the highest penetration among fuel retailers (71.6%) and department stores (59.7%).

In contrast, the sectors in which retailer payment cards are least likely to have been launched are online/home shopping (13.9%), health/beauty (15.4%), and books, music and videos chains (17.6%). 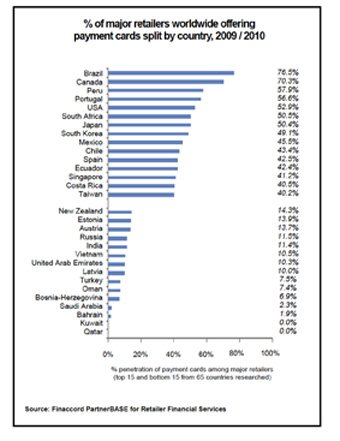 The high rate of penetration among fuel retailers is mainly the result of the provision by this category of fuel cards intended principally for business customers rather than consumer-oriented, co-branded cards. In fact, at the time of the research, among the 444 fuel retailing brands investigated, 196 were running a traditional fuel card only, 60 were offering only a co-branded, consumer-oriented card, 62 had introduced both types of card and 126 had not developed either type of card.

Commented Alan Leach, director of Finaccord: “Co-branding and partnership strategy is a key subject for issuers of payment cards worldwide. In fact, major retailers constitute the most important partner category measured in terms of the number of cards that they can potentially issue and, in many cases, in terms of profitability. However, across the full universe of 1,945 retailer payment cards identified, including debit cards and rechargeable pre-paid cards as well as credit and other pay later cards, it is intriguing to note that over 40% exist only in a private label format. In addition, a significant number continue to be issued either by the retailers themselves or by captive banks owned by those retailers. This signifies that there may be significant potential for conventional card issuers, including banks, to acquire the existing cardholder portfolios of retail groups by purchasing equity stakes in their captive card issuing operations.”

Global Retailer Cards: Co-Branded, Loyalty and Private Label Programs was published in June 2010 and is available from Finaccord at a cost of £3,995.