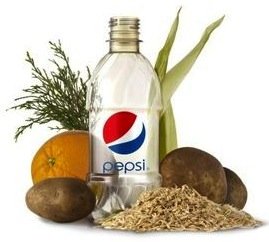 PepsiCo has launched a bottle made entirely from grass, pine bark and corn husks in a bid to gain credibility in the competitive green market.

The move is a major departure for Pepsi and the company claims the bottle functions just as well as its standard environmentally-unfriendly plastic model which took over from glass bottles in 1983.

The launch is a piece of one-upmanship on arch-rival Coca-Cola which launched the “green” PlantBottle in 2009,  which is made partially from plant-based materials.

The pilot production of the new bottle will start in 2012 prior to a planned full-scale rollout.

PepsiCo suffered a green malfunction last year when its Frito-Lay brand launched a fully compostable bag for its SunChips Jalapeno-flavoured snacks. The product had to be withdrawn after consumer complaints that the bag was too “noisy”.

Customers were so angry they created a Facebook page called “SORRY BUT I CAN’T HEAR YOU OVER THIS SUN CHIPS BAG” which attracted 55,000 followers.

Pepsi says it has now issued a “quieter” bag.

Pepsi is ranked first above Coca-Cola in terms of how “green” consumers perceive them to be, according to the latest index from customer loyalty and branding analyst BrandKeys

However, in terms of recycling Pespi ranks only second behind Coca-Cola, with
7-Up third and Mountain Dew/Dr. Pepper in fourth place.

BrandKeys CEO Robert Passikoff said the Pepsi move “would appear to be going in the right direction for creating more powerful brand engagement. At least in this value, though there are others, bubbling up in the consumer’s hierarchy, that may cause all the brands in the category to swallow harder, like what’s inside the bottle.

“That’s why a view of the consumer ideal matters most of all. Brands that have those metrics hold the card to the future,” says Passikoff.