The US had the highest brand value with 185 companies in the top 500, calculated at a total worth of US$1,614.6bn. Japan was a distant second, followed by Germany, France, the UK and China. 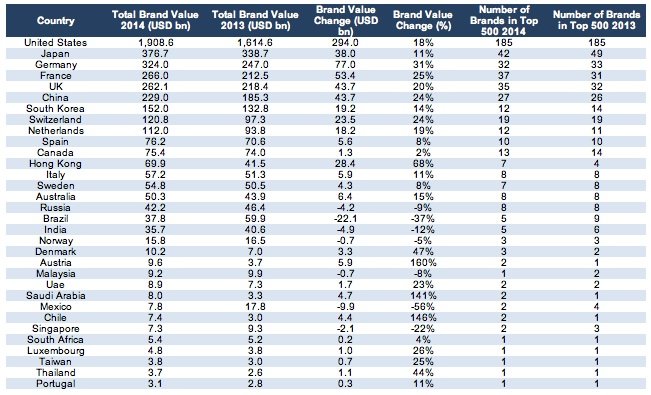 The UK’s top-ranked brand was Vodafone in 16th, followed by HSBC, Tesco and BT.

The UK’s Most Valuable Brands 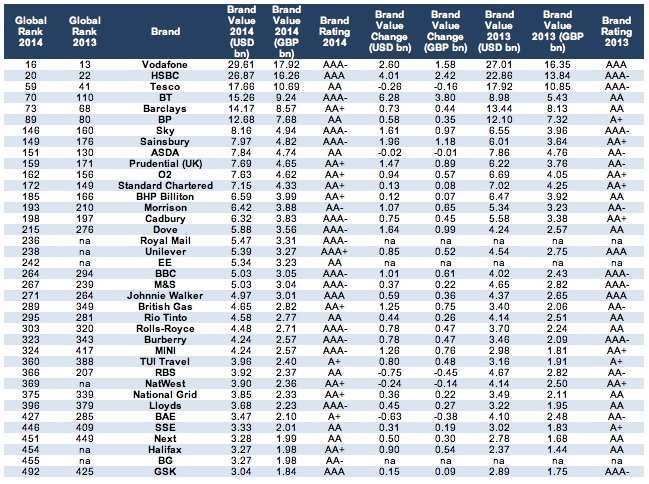 Brand Finance said that UK brands have had a successful year of growth, none more so than BT. BT’s Brand Value is up 70% to a total of US$15.3bn (£9.3bn). Its content focused strategy, investing huge sums in Rugby and in particular Premier League football to challenge Sky, appears to be paying off.

Burberry, a brand that wears its Britishness on its sleeve, has also had a good year. Its brand value now stands at US$4.2bn (£2.5bn) following 22% growth despite the departure of visionary CEO Angela Ahrendts. Even the much maligned BBC has seen is brand value rise. The Beeb now controls a US$5bn (£3bn) brand thanks to the success of its commercial wing in exporting the programmes and formats developed by Britain’s exceptional creative talent. Mini is another top performer, rising 40% to US$4.2bn (£4.6bn), showing that British brands need not necessarily be British owned to be successful.

Brand Finance says that brands are probably the most valuable assets that companies own, driving demand and building relationships with customers and partners.

It calculates brand value by determining the royalties a corporation would have to pay to license its brand if it did not own it, known as the ‘royalty relief’ method. As well as a brand value, each of the 500 brands assessed is accorded a brand rating; a benchmark of the strength, risk and potential of a brand relative to its competitors, expressed as a letter code from AAA+ to D, similar to a credit rating.