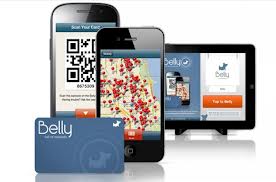 It was to be expected that the major food retailers and travel companies would be early users of mobile devices for customer communication and loyalty rewards.

What was unexpected is that the restaurant sector would be a major early adopter, with a flurry of dedicated apps being launched by all types of eating establishments.

For quite a while in the US particularly, dining-out chains have used online vouchers to entice customers to venture out. But this trend is seeing a decline, while mobile reward apps are on the ascendancy.

Apps leading the way  – Front Flip, Belly and Punchh
Belly
Loyalty app provider Belly has more than 6,000 merchants and nearly half are restaurants. It charges merchant customers $50 to $100 a month to use its services. For that, they get an iPad, which they usually place on the store’s counter near the cash register, and a loyalty programme customised for their business. Customers with mobile phones scan a bar code from the app on the restaurant’s Belly iPad, which tracks the points they earn and redeem. Customers who don’t own a mobile device can scan the iPad with a plastic rewards card.

More than 30 similar mobile loyalty apps have emerged in recent months, said Logan LaHive, chief executive of Belly Inc., the largest of the group. And in fact at the recent National Restaurant Association (NRA) show in Chicago, there were 48 providers of mobile marketing and loyalty solutions displaying their wares, up from 36 the year previously. 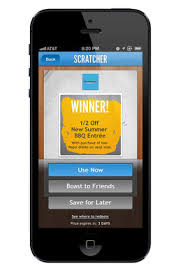 More than 2,000 businesses are using FrontFlip to host their loyalty platforms, and more than 600,000 customers have downloaded the app that allows them to scan QR codes posted inside participating restaurants to win instant prizes.

The company recently released Automation Gifting, digital gifts that are sent to those with the Front Flip app. Users get a push notification whenever the gift arrives. For example, customers receive gifts the day after they join the platform and also on holidays and birthdays or after 30, 90 and 120 days of no visits. Lastly, the platform tracks demographics and customer participation.

“Consumers are increasingly using their mobile devices to make dining decisions, and competition for “phone share” is fierce. According to a recent survey by Chadwick Martin Bailey, 81 percent of consumers have searched for a restaurant on a mobile app in the last six months.
To stand out, restaurants need more than a static mobile listing or online menu. They need to truly engage customers on their mobile devices in a way that holds their attention and drives them in-store.

Founder Sean Beckner commented: It was exciting to hear all the buzz about the loyalty space at the NRA. This year the question wasn’t, “Are you looking for a loyalty program?” but which one? When restaurants have real engagement, that’s when they will see visit frequency and transactions spike.”
Anyone with a smartphone can download the apps and begin using them.

At restaurants that use Front Flip, customers use their iPhone or Android phone to scan a QR code that is usually placed at the entrance or on a table. That unlocks a digital scratch-off card—in which the player scratches off a covering that reveals a prize—and gives customers a chance to win free or discounted menu items on the spot. Customers also can scan a code on the back of their receipt from home. The system resets daily so customers can keep trying to win.
Front Flip charges restaurants $125 a month for the service.

Punchh, which serves only restaurants, has more than 1,000 locations using the platform and is expecting to double that within a few months, said CEO Jitendra Gupta.

Using Punchh’s cloud-based program, restaurants can create a personalized app that rewards patrons with points for purchases and referrals. It can be integrated into the customer’s existing POS system to allow restaurant users to “punch” their own cards when dining or referring friends. The system also tracks purchasing data and social media activity generated through the Punchh platform.

Gupta says that mobile loyalty programs are a lot easier to deploy, and get much better results than traditional paper or swipe card-based programs because customers often forget to carry these cards. With Punchh-enabled mobile loyalty, restaurants see at least two to four times adoption rates and repeat usage rates, 10 times more reviews than Yelp and a 7 to 10 percent increase in sales.

Restaurant examples
Giraffe
One of these is the Giraffe restaurant chain which has launched its first mobile app to specifically reward customers for repeat visits.
The app offers two rewards – a free takeaway coffee and 50 per cent off food – both of which can be redeemed after a number of visits have been reached.
Customers who download the Giraffe app before the end of the offer period receive one free pre-loaded stamp for each offer. Users can also gift each other stamps and swap them with friends by entering their email address.
Giraffe’s co-founder Juliette Joffe said: “We’ve tried to keep it as simple and concise as possible to appeal to a wider audience, whether they are popping in for a regular coffee or visiting us for a meal.”
Other functions of the Giraffe app include reservations (powered by Live Res), geolocation mapping (for the nearest giraffe), browsing the menu and viewing general Giraffe restaurant news.

Strada
Meanwhile, Strada – the Tragus-owned chain of Italian restaurants – is offering customers an incremental discount on their food, which increases each time a customer visits an outlet.

Customers who register with Strada are eligible to receive a special ‘pop-in voucher pass’, containing three codes which must be used in the order they’re listed. The first is for 25 per cent off food, the second for 30 per cent and the third for 35 per cent.
Restaurants embracing mobile loyalty is not not just a US phenomenon. A recent survey of 2,000 UK restaurant-goers showed that 48 per cent of 18-24 year olds would be more likely to visit a pub or restaurant that offered a loyalty scheme, compared to one in four for a discount programme.

McDonalds – reason to return
To give customers a reason to come back—and to reach young customers who don’t clip coupons, Todd Luther, owner of nine McDonald’s Corp. MCD +0.22% outlets in Fort Collins, Colo., recently signed onto Front Flip. The mobile loyalty program is available at eight of his outlets and gives diners a chance to win a sandwich or drink when they visit.
Luther said he has noticed a 10% to 25% increase in sales of menu items promoted on Front Flip compared with rival McDonald’s in the area that don’t offer the app.
“The [restaurant] market is not expanding, so everyone is in a fight for that one customer,” he said. “What can we do differently to get them in the door?”

Criticisms
But there are criticisms around the number of loyalty programmes being launched, the lack of real reward being offered and the lack of fresh features.
While restaurant loyalty programme memberships rose almost 27% to 2.65 billion in 2012, active participation—those cases in which people redeemed rewards at least once a year—dropped to 44% last year from 46% in 2010, according to research group Colloquy.

App providers argue that there are additional benefits for merchants in a greater understanding of their customers which helps restaurants tailor their marketing.
Front Flip says that customers scan their smartphones at a business, customers agree to share their first name, last name initial, gender, age and visit information. “We track what day of week they’re coming, what time of day and how often they come, and all the data goes to the business,” said Sean Beckner, CEO of Front Flip. Papa Murphy’s, a  32 restaurant chain take-and-bake pizza group has amassed 30,000 Front Flip users since adopting the app six months ago. Before Front Flip, the Papa Murphy’s restaurants in that market knew through customer surveys that the number of days between visits averaged more than 50. For those using the Front Flip app, the average number of days between visits is 22.