Rewards plus lack of fees equals increased credit card use

Credit card holders are more likely to use cards that offer specific rewards and lack annual fees,  a new survey has found.

The average American uses two credit cards regularly, and will select which cards to use based on specific deals, according to the research from compete.

Americans hold 4 credit cards, use 2
The average American holds 4.4 credit cards. However, they regularly use 1.9 of those cards, rarely use 1.6, and never use one.
Specific deals biggest influence on card choice

Wile a variety of reasons influence Americans’ decisions on which credit cards to use, specific deals such as double points for purchased made at certain merchants are the leading reason, influencing 36% of cardholders. Another 29% of cardholders use one primary credit card and will use another if their primary is not functioning or does not get accepted.

Interestingly, 18% of cardholders have no particular reason for favoring one credit card as compared to another. Ten percent will dedicate a specific card to a specific type of purchase (such as grocery), and 5% have other reasons for favoring certain card(s). Only 2% will use one card for personal purchases and another for business purchases.

In addition, compete research found that the longer a cardholder has a particular card, the greater the odds they will use it. 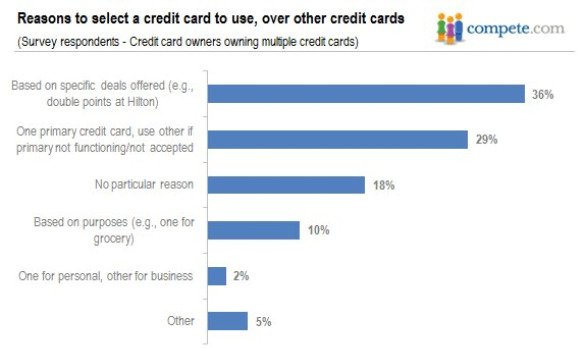 Habit, rewards determine card usage
The two primary factors influencing card usage are habit and rewards. Thus compete advises credit card issuers to provide incentives for tenured cardholders. This will encourage loyalty and frequency of use among cardholders, reinforcing card usage and helping to ensure those cards are among the ones used on a regular basis.