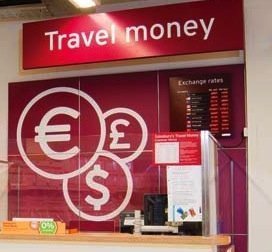 The offer, which will run throughout the summer, will for example, allow a customer holding a Nectar Card and buying Euros to, on average, receive up to approximately €9.09 more when exchanging £450 (based on in-store rates on 1st July 2010.

Scott Gorman, Head of Sainsbury’s Travel Money, said: “This recent offer is just one of the many benefits of our Travel Money. Holidays can be expensive, especially when you add up all the little extras such as sun screen and spending money. We’re pleased to be able to give our customers preferential exchange rates when they use their Nectar card so that their holiday money will go a little further.”

On Tuesday we reported that BP is offering double Nectar points to UK customers who use its petrol stations as it seeks to repair the huge damage to its image from the disastrous Gulf of Mexico oil spill.

In an e-mail to customers, BP said: “This exclusive offer is to say ‘thank you’ for being a BP customer and is available on BP fuel.”

Nectar is the UK’s largest loyalty card scheme with a 18.6 million members. In addition to BP, participating retailers and organisations,  include Sainsbury’s, the AA, Homebase, EDF Energy and the AA.

Members get two points worth 0.5p each for every £1 they spend at Sainsbury’s and one point for every litre of fuel bought at BP service stations.

Points can also be collected at 450 online retailers including Amazon and eBay.

Previous Post: « Tesco offers car discounts to cardholders
Next Post: Restaurant visits can be incentivised with vouchers – but be careful about your brand »