Social media backlash after Sainsbury’s halves Nectar points
Loyalty scheme still offers good value even with reward points cut in half from 11 April next year, says supermarket
A social media furore has erupted on the news that Sainsbury’s is “changing the way customers earn Nectar points’ and halving the reward from two points per pound spent to one. 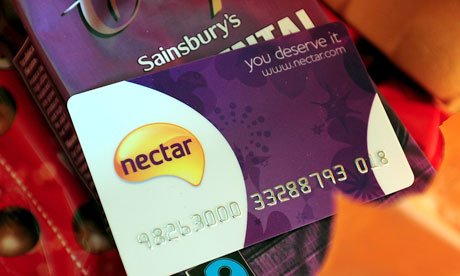 Instead, it will be introducing personalised offers, special deals and bonus Nectar points.

From 11 April next year customers will earn only one point for every pound spent in store or online, compared with two at the moment. The supermarket group will also stop rewarding shoppers with a point for every bag they reuse, but will still be awarded a point per litre of fuel bought from Sainsbury’s.

Sainsbury’s insists its Nectar card still offered good value. In an email to customers, it said there would be “lots of new opportunities to boost your balance faster and more value when you spend your points”. The result of this email was a deluge of comments on Twitter, Facebook and other social media with the general view that as it will take £500 of spend to get £2.50, this doesn’t generate much of an excitement factor.

A Sainsbury’s spokesperson said: “We are changing the way customers earn Nectar points and launching more high-value bonus events, like ‘Swipe to Win’, 10xpoints on fuel and adding more categories to our Christmas ‘Double Up’ event so that customers can make their points go even further.”

Nectar
Speaking to Loyalty Magazine, a Nectar spokesperson said they had been working with Sainsbury’s on the change for some time, and although it was being made clear to shoppers there would be a 50% reduction in the value of Nectar points, they believed the overall benefit for a regular Sainsbury’s shopper would be about the same.

“The fundamental premise that Nectar points are a thank you remains the same. The plan is to make the points more relevant, by personalising them, and rewarding in a slightly different way.”

The Nectar spokesperson also made clear that this was a change specific to Sainsbury’s and would not affect any other partner offering of which there are many reward point variables.

Britain’s shopping landscape is shifting and following the Europe-wide trend of strengthening propositions from the budget brands, especially German discount chains Aldi and Lidl, neither of which have loyalty cards.

At the same time, Morrisons has just launched its own loyalty scheme, called Match & More. Escalating the supermarket price war, it pledged to match prices with the other big four supermarkets, and with Aldi and Lidl – the first time such a promise has been made in the grocery sector.
Crawford Davidson, customer director at Morrisons, insisted that customers “like the idea of points-based supermarket cards; they like the idea of getting something back from shopping”. He added: “What they find frustrating is all the silly bits of paper they have to remember to get their price promise or their price match.”

Why change the deal?
Sainsbury’s says that customers will still earn one point for every litre of fuel they buy, and promises “new opportunities to boost your balance faster and more value when you spend your points,” citing the current ‘Thanks a million’ event as an example.

There will also be a month-long period after the changes are introduced where shoppers can collect 10 points per litre of fuel purchased, equivalent to 5p a litre. In addition Sainsbury’s will be running Christmas and Easter ‘Double Up’ events among other promotional activities.
However, these changes probably won’t win over non-drivers, as they will not benefit from the extra fuel points and will lose half of their in-store point earnings.

A mission statement from Sainsbury’s says that it ‘aims to be the greenest grocer” so more eco-initiatives may be planned. It is a surprise though, that it has dropped the point incentive for customers to reuse bags and there is irony in its extra reward for fuel.