TAM launches new customer loyalty network
Brazilian airline TAM has launched Multiplus Fidelidade, a new business unit which is based on the concept of networks of customer loyalty programmes. 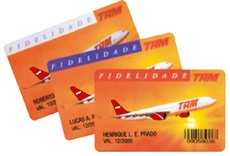 TAM Fidelidade will continue to be the reward programme for TAM’s frequent fliers. The airline says its points will soon be entered into Multiplus Fidelidade, making it easier to accumulate points from other loyalty programmes that already form part of the passenger’s daily routine, as well as offer a greater selection of prizes to be redeemed.

“Multiplus Fidelidade was created to serve as an efficient tool for those companies that use reward programmes to establish loyalty and retain customers,” commented Libano Barroso, VP of finance, management and IT at TAM. “We believe that this initiative has tremendous potential to take hold among Brazilian consumers based on examples of similar experiences in other countries, such as Canada, the United States, the United Kingdom, Germany and France.”

He added that the unit could become an independent company in future.

Multiplus Fidelidade will enable members to accumulate points with the purchase of airline tickets for flights operated by TAM and a number of other airlines that are partners of the TAM Fidelidade frequent flyer programme, in addition to a number of sales and service establishments that are already partners.

What is new with Multiplus is the possibility of redeeming points for tour packages with TAM Viagens, initially for clients from Sao Paulo, Belo Horizonte and Rio de Janeiro. There are more than 20 different options for both domestic and international excursions. Packages start at 35 thousand points, and include roundtrip airfare as well as accommodations, and will be available through the central sales office at TAM Viagens.

“The entry of more than 5.5 million current members of TAM Fidelidade into Multiplus will be automatic,” said TAM’s Libano Barroso.

Points already accumulated by current members of TAM Fidelidade will continue to be valid and available for redemption. The new partners of Multiplus, as well as the new alternatives for redemption of points, are to be disclosed shortly.

More information about Multiplus Fidelidade is available at: www.multiplusfidelidade.com.br.

TAM claims to have a 44.9% share of the domestic air travel market, and 86.8% among Brazilian companies that operate interntional flights.

TAM currently has over 5.5 million members of its loyalty scheme, and has issued more than 7.4 million tickets for frequent flyer points.