Tesco has been rated the worst UK supermarket for the in-store customer experience in a poll by consumer group Which?

Waitrose was rated the best by consumers, receiving a customer score of 82% which included five-star ratings for its customer service and the quality of its fresh produce.

Tesco – renowned for its effective use of customer data via the Clubcard loyalty scheme – was rated the worst of the nine major supermarkets, getting a customer score of 45% with poor marks for its pricing, store environment, quality of fresh produce and customer service. In comparison, Tesco’s online service was rated more favourably (63%). 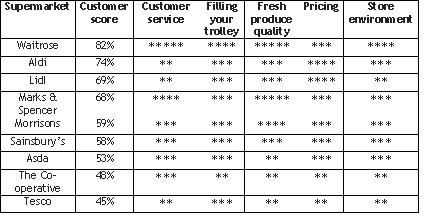 More than 11,000 Which? members rated the supermarkets with customer scores based on customer satisfaction and the likelihood they would recommend it to a friend.

Discount supermarkets Aldi (74%) and Lidl (69%) came second and third, respectively, beating some of the bigger supermarkets such as Morrisons (59%), Sainsbury’s (58%) and Asda (53%). Aldi and Lidl were the only supermarkets to get four-star ratings for their pricing, with 97% saying they both offer good value.

The survey found that the biggest irritation (37%) when shopping in supermarkets is not being able to compare prices because of different unit measurements. Members said they wanted supermarkets to keep special offers simple, with 55% preferring straight discounts ahead of other offers such as petrol vouchers (16%) or buy-one-get-one-free deals (11%).

Which? executive director Richard Lloyd said that rising food prices are one of the top financial worries for recession-hit customers, so supermarkets that scored well for value for money were ranked highly.

He added: “ Our survey also found that consumers think supermarkets are not doing enough to help shoppers on tight budgets, with only one in five Which? members saying they trust retailers to charge a fair price for food.

“We want supermarkets to make a firm commitment to treat their customers fairly by scrapping misleading price promotions and introducing clear, consistent unit pricing so busy shoppers can spot the real bargains.”