More than 207,000 Tesco staff, from checkout operators to drivers and managers, will share a £98m bonus pot as the company announced details of its biggest ever ‘Shares In Success’ scheme. 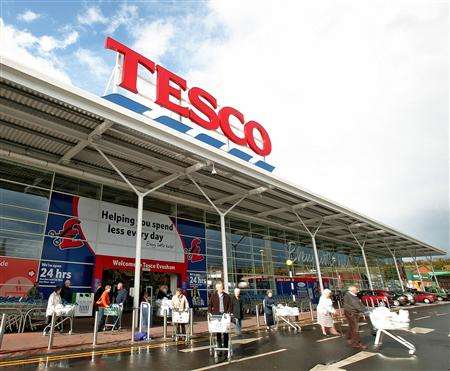 The retailer says the shares bonanza is a big thank you for the hard work which enabled Britain’s biggest private sector employer to recently report profits of £3bn for the last year.

66,000 staff who have held shares in the scheme since 2004 also today became eligible to sell the £37m worth of shares they were awarded 5 years ago tax free.

Tesco’s share scheme hugely incentivises staff loyalty and longevity, because they have to have worked for the company for 12 months to qualify for the share scheme in the first place, and the shares are held in trust for five years before they can sell them.

Today’s record pay out is on top of more than £238m awarded last year through incentive bonuses and share schemes. This includes £21m of pay and bonuses for the Executive Board who led the Tesco team in a year when Britain’s leading supermarket created thousands of new jobs, slashed millions of pounds off prices and flew the flag for British retail in 13 overseas markets.

Non-executive Chairman, David Reid, praised the efforts of the Tesco team, he said: “As always our success is down to the hard work and skill of the whole Tesco team. They deliver for customers every day and have made Tesco a British success story at home and abroad, an achievement of which we should all be especially proud given the current economic climate. I am delighted that once again all staff are sharing in this success.”

As well as growing profits by 10%, Tesco also created around 10,000 jobs in the UK last year, including 3000 for the long-term unemployed. It donated £57m to good causes in the UK and internationally.

In terms of loyalty, Tesco is this year revamping its Clubcard scheme to incentivise shoppers to spend more in certain areas, such as baby goods and wine. Last yer it gave over £400m worth of Clubcard vouchers back to customers.

In terms of international and non retail expansion, last year it took full ownership of Tesco Personal Finance and made a major acquisition of 36 hypermarkets in South Korea. It is entering the Indian market through a new cash & carry business.

• Carbon Labelling 100 Tesco products including orange juice, detergent and potatoes
• Opening its most carbon efficient store so far in Cheetham Hill, Manchester, with a 70% smaller carbon footprint than a conventional store
• Halving the energy use per square foot in our UK stores
• Helping 4.6 million people around the world get active
• Growing sales of local produce by more than 30% in the UK