The power of the internet: 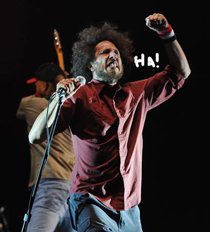 Twitter campaign rigs Christmas number 1; YouTube Most Watched surprises
Anyone who disputes the power of social media should ponder a couple of end of year stories making the headlines this week.  First there was the Christmas number one. In recent years this was a foregone conclusion. First you win X Factor, then you hit the number one spot.

Except this year a guy called  Jon Morter (35), a part time rock DJ and logistics expert from near Chelmsford, started a Twitter campaign to encourage people to buy a very different record to knock this year’s X Factor winner Joe McEldery off the top spot.

He chose a track that is as unlike the McEldery ballad as it possible could be. Its main refrain is “Fuck you, I won’t do what you tell me.”

Killing In The Name, an expletive-heavy rock song first released in 1992 by the Californian rock band Rage Against the Machine, won the battle for Christmas top spot on the basis of downloads only. It sold about 500,000 copies last week, about 50,000 more than The Climb, McElderry’s earnest ballad.

Morter had tried a similar wheeze last year, when he attempted to get Rick Astley’s Never Gonna Give You Up to the top of the Christmas charts.  He only managed to get it into the lower echelons of the chart but this year he was helped by the comedian Peter Serafinowicz, who on 15 December urged his 268,000-plus Twitter followers to join in, and it snowballed from there. By the time Paul McCartney and former X Factor winner Steve Brookstein had pledged their support, the internet snowball was rolling.

When the Guardian broke the news to Morter that he had won, he was initially lost for words. “Oh bloody hell,” he is reported to have said, as the consequences of what he had done became clear. Composing himself, he said:

“I think it just shows that in this day and age, if you want to say something, then you can – with the help of the internet and social networking sites like Facebook and Twitter. If enough people are with you, you can beat the status quo.”

Rage Against the Machine have pledged to give all profits of the single to the homelessness charity Shelter, and will perform a free victory gig in the UK to thank those who bought their single.

Depending on your view, the Rage victory was either a wonderful victory over Simon Cowell’s X Factor Christmas No 1 juggernaut or an outrageous assault on the pop charts. Whichever, it is a powerful example of what people and the internet can achieve together.

YouTube Most Watched surprises
It’s staggering but true. Susan Boyle’s first apperance on Britain’s Got Talent was the Most Watched video on Youtube in 2009.

This is the first time that YouTube, officially the world’s largest online video community, has released its official Most Watched lists.

“From a new singer’s debut on the world stage to newlyweds dancing down the aisle, YouTube offers everyone a way to experience and share in the big or small moments that touch millions of people around the world,” said Chad Hurley, CEO and co-founder of YouTube.

In addition to compiling the YouTube Most Watched lists, YouTube also examined the billions of queries that people typed into YouTube search in 2009 to identify some of the fastest-rising search terms for each month. Like Google Zeitgeist, these lists reveal the interests, issues, and entertainment that connected the world throughout the year.