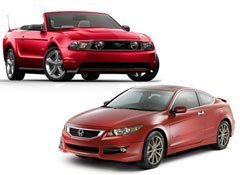 Crisis-hit Japanese car marker Toyota has lost its title for having the most loyal customers in the US.

Data from non-profit publication Customer Reports indicated that rival manufacturers Honda and Ford are now first and second for customer loyalty out of the five biggest selling car brands in the US, as Toyota has been hit by high-profile problems with vehicle safety and quality.

The figures for April showed that 57% of current Toyota owners would “most likely” buy another new vehicle from Toyota, down from 70% in a December survey.

The result suggests that Toyota, the world’s biggest card maker, could face pressure to extend expensive sales incentives to win back US consumers and prevent its market share from falling.

More than half of consumers surveyed said the “overall reputation” of an auto brand was the leading factor in their choice of a new car, Consumer Reports said.

Honda Motor Co was first in owner loyalty in April, with 68% of its owners saying they would return to Honda, up from 67% five months earlier.

Ford also has a higher percentage of customers who would return to the brand – 61% in April versus 58% in December.

The Chevrolet brand, which accounted for almost two-thirds of General Motors Co’s US sales in 2009, fell in terms of customer loyalty to 49% from 57% in December.

Rounding out the top five top-selling brands in the US market, Chrysler’s Dodge polled at only 24% customer loyalty, down from 32% in December.

The chart below shows how the top brands scored and details the percentage of current owners who feel they will most likely buy a new car from the same brand next time they are in the market. It compares findings from other, recent surveys conducted by the Consumer Reports.

Toyota’s sales fell in January and February while its rivals’ showed increases. By March, Toyota began offering the largest sales incentives in its history and extended most of those discount offers to the end of May.

Toyota sales recovered in March and April as customers took advantage of the incentives, which include zero-percent financing and up to $1,500 cash back for its top-selling Camry sedan.

The Consumer Reports results were based on a telephone survey of 1,704 U.S. adult vehicle owners conducted in April.