US loyalty programme membership grows
Membership in US loyalty rewards programmes has reached 1.808 billion, according to a new survey. 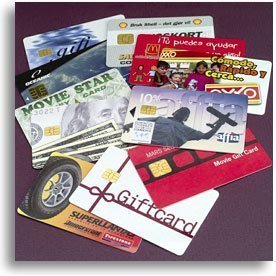 The adjusted total represents a 24% growth from the 1.3 billion total in 2007. These are among the findings in the 2009 Loyalty Census from loyalty marketing organisation Colloquy.

The 2009 census covers three industry segments not included in the 2007 version: Car Rentals, Cruise Lines and Mass Merchandisers. If these new industries are removed, the adjusted 2009 US census total stands at 1.673 billion.

The latest census shows the average US household has signed up for 14.1 loyalty programmes but actively participates in only 6.2 of them. The corresponding numbers in 2007 were 12 and 4.7.

The number of active memberships in US loyalty programs is calculated at 792.8 million – a number that the study’s authors characterize as “one of the worst-kept dirty secrets of the industry.”

Definitions of active memberships vary from company to company; but a typical example is a member that has at least one instance of activity, such as earning points on a purchase or redeeming for a reward, within a 12-month period. The 792.8 million number means the rate of active membership is relatively flat at 43.8%, compared to 39.5% in 2007.

“Given the bursting of the credit bubble, the recession and pressure to control program costs, loyalty marketers must turn to growing program value, not the size of their membership base,” added Colloquy editorial director Rick Ferguson. “Conditions are ripe for marketers to use loyalty data across the enterprise, enhance value propositions and adopt innovative loyalty models such as coalitions, as they seek to revive lapsed members and turn engaged members into profitable, loyal customers.” 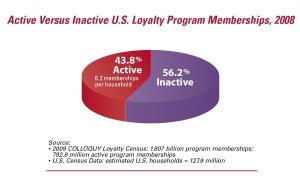