The Utilities industry has come bottom of new customer service rankings of 13 sectors with an overall satisfaction rating of 71.4%.

This compares to the 81.9% for Retail (non-food), the highest rated industry in the rankings compiled from 39,000 separate customer experiences by the Institute of UK Customer Service. 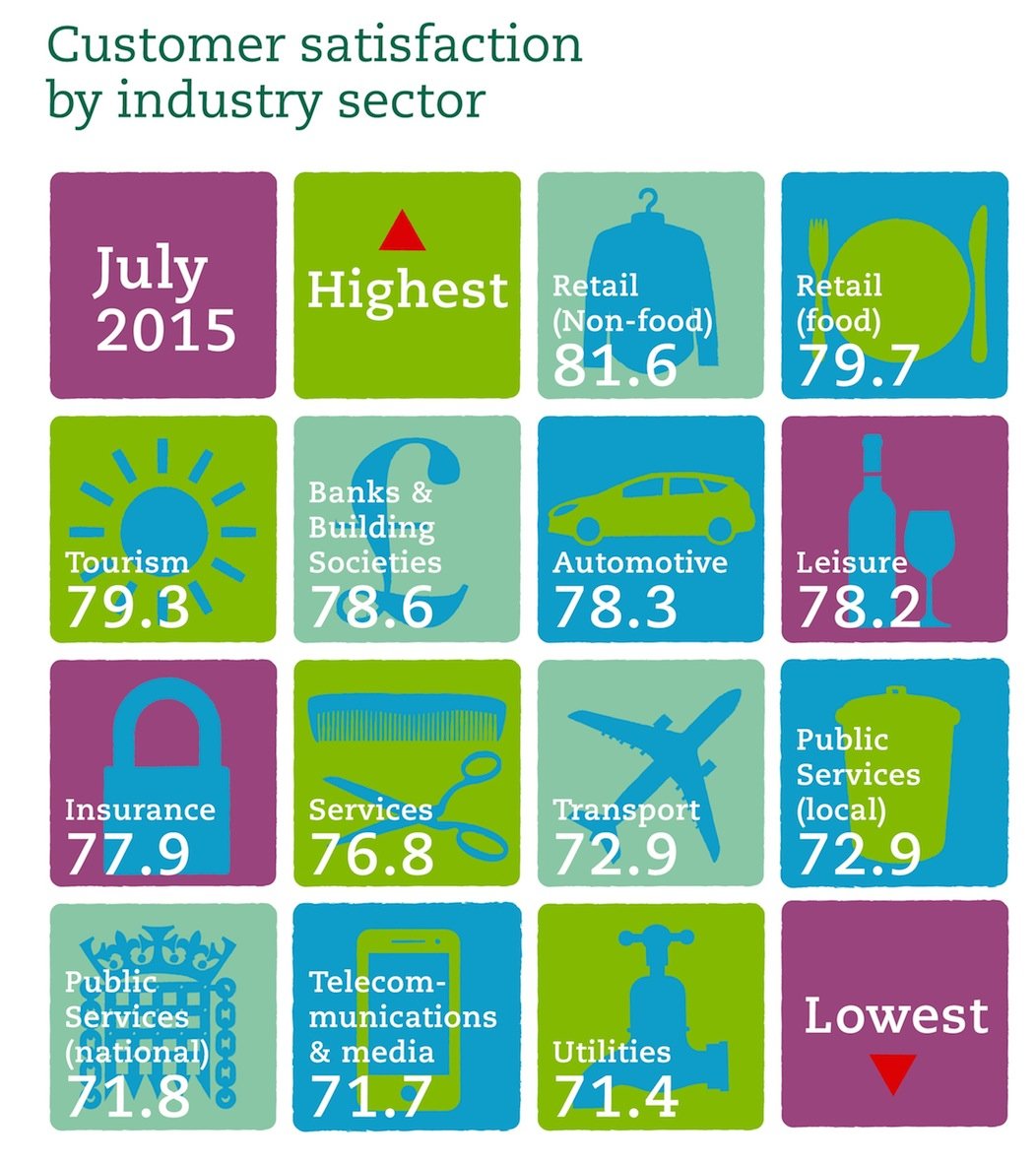 The Institute says that customer satisfaction has dropped to its lowest level since 2010, although it appears to be stabilising.

There is contrasting performance at sector level with a number of the higher scoring sectors seeing falls in customer satisfaction compared to a year ago. Retail (Food) has dropped 1.2 points, and the Automotive and Leisure sectors have both seen a fall of 1.4 points. By contrast, Utilities, Public Services (Local and National), Banks and Building Societies and Transport have all improved.

Apart from LOVEfilm, the only other organisations in the top twenty that have increased their customer satisfaction by more than one point compared to twelve months ago are Iceland, Saga Insurance, M & S (non food) and Yorkshire Bank. 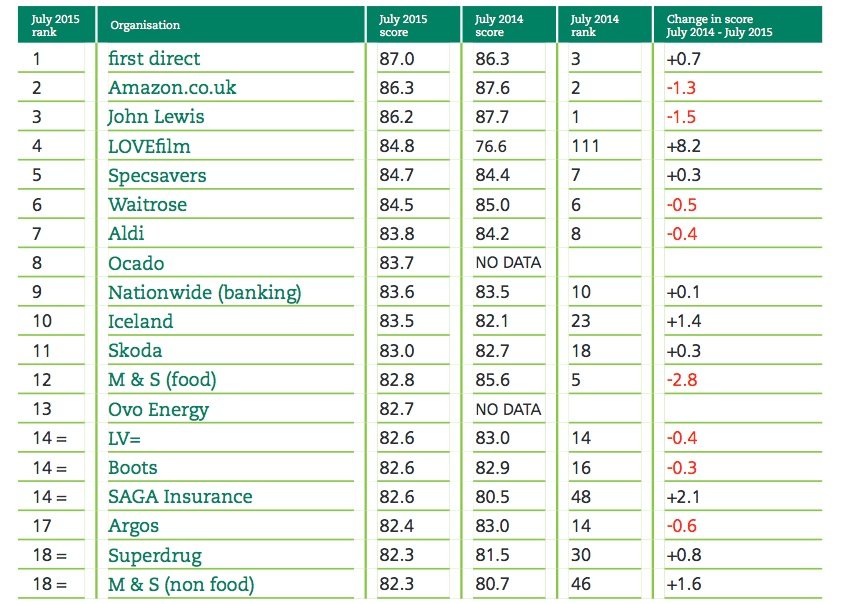 Many of the most improved organisations have shown particular gains in the areas of helpfulness and competence of staff as well as speed of service.

Customers who give an organisation a nine or ten (out of ten) rating for customer satisfaction are much more likely to trust, recommend and stay with them, even compared to organisations who receive an eight out of ten. For example, customers who give a nine or ten score for customer satisfaction are more than twice as likely to give the highest ratings for trust, compared to those who give an eight out of ten score. 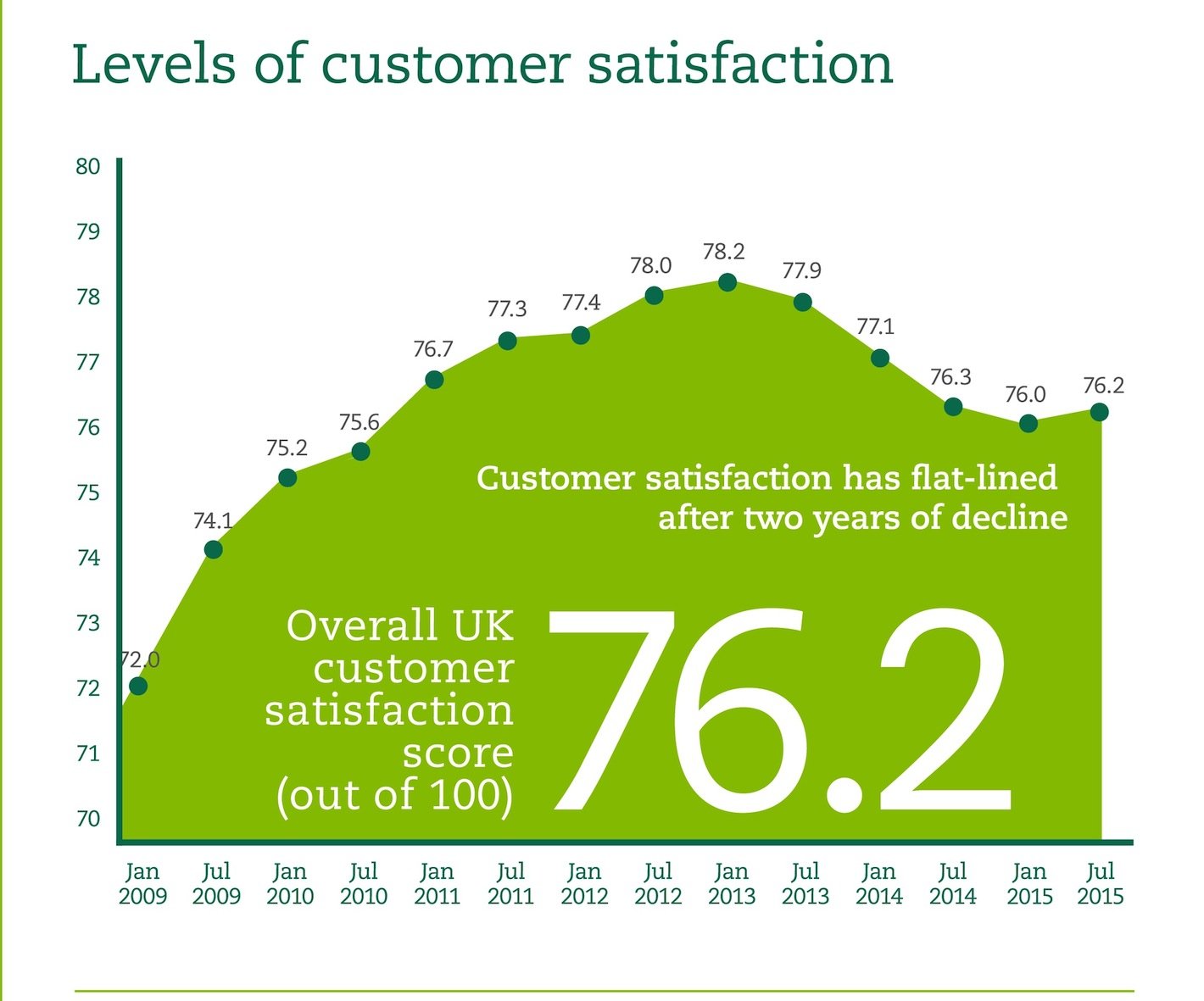 In a climate of rising customer expectations, especially around speed and convenience, the ICS says that organisations’ ability to deal efficiently with problems and complaints is a key differentiator between high and low performance. 13.2% of customers experienced a problem with an organisation in the past three months, rising to 22.2% in the Telecommunications and Media sector.

Jo Causon, CEO of the Institute of Customer Service, commented: “Many organisations are struggling to keep pace with a business environment that has undergone rapid change in recent months. Some brands are improving customer satisfaction by operating in an agile and innovative way, but overall it is clear that a new approach is required for this new environment. Businesses need to take a look at the experience they are delivering to customers and identify how it can be improved.”

The UK Customer Service Index (UKCSI) rates the customer satisfaction of organisations in 13 sectors of the economy, covering many of the leading organisations in each sector. It also provides satisfaction ratings for each of the 13 sectors and for the UK as a whole. Customers are asked to rate individual organisations they have dealt with on a range of customer service priorities relating to professionalism, quality and efficiency, ease of doing business, timeliness, problem solving and complaint handling.