Wal-Mart Stores, the world’s largest retailer, has launched a MasterCard rewards card in 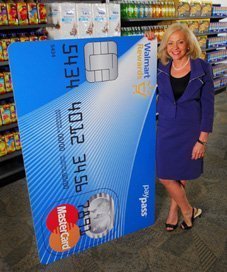 Canada. It says it has plans to offer more banking services and products across the country.

Wal-Mart gave up after multiple attempts to launch a bank in the US, and has been working on its Canadian banking licence for two years.

“Over time, we would expect to launch additional products in the financial services area,” Trudy Fahie, president and chief executive officer of the Canadian banking unit, said in an interview with Bloomberg. “For now, it’s truly a singular focus on the cards.”

The credit card is the first offering from the retailer’s newly licensed bank in Canada, which plans to target the 1 million customers who visit the 318 Wal-Mart stores in the country each day.

The cards will be sold at checkout counters as well as about 200 kiosks that have been installed in Wal-Mart locations.

The no-fee card carries an annual interest rate of 18.99%, which compares with 19.97 percent for the MasterCard offered by President’s Choice Financial, the bank unit of Loblaw Cos., the country’s biggest supermarket chain.

The MasterCard offers holders loyalty rewards for every dollar they spend, which can be redeemed immediately for merchandise.

Wal-Mart is expected to provide stiff competition to other major players by bringing its low-cost business model to the bank sector and rewards field. It waited almost two years to get federal approval for its bank, and now observers anticipate such products as savings accounts and mortgages.

It will be interesting to see if Wal-Mart then adopts the loyalty business proposition in other parts of its business.

Previous Post: « Nectar to rally Nation in troubled time
Next Post: Who should football players be loyal to? »