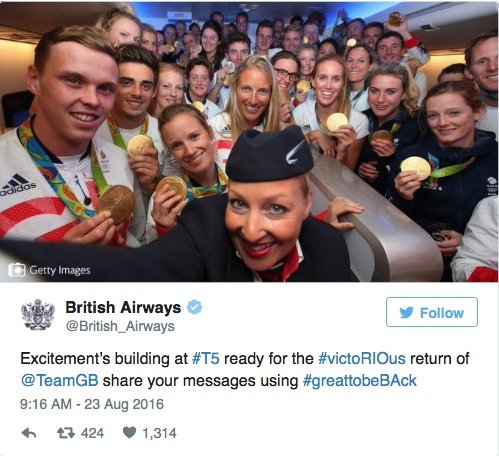 Talk about a public relations triumph. BA repaints its plane’s nose, amends the flight number to BA2016, loads 77 bottles of champagne and takes all the credit for bringing our superb and incredible athletes home safely.

The athletes loved it, tweeting things like “Huge thank you @British_Airways for an amazing flight. Such an honour to be a part of this moment with@TeamGB #greattobeBAck” from Sam Quek.

“Touch down! Back in the greatest country in the world #Greattobeback @British_Airways,” from swimmer Adam Peaty, who won the men’s 100m breaststroke, Team GB’s first men’s swimming gold medal for 28 years.

There were dozens more.

And oh yes, BA deserved the praise because the whole thing was done BA properly. Video footage filmed onboard shows athletes singing the national anthem before takeoff. The Olympic-themed film Chariots of Fire was shown on the flight, which carried home pole-vaulting equipment, javelins, bicycles, and a 6.7-metre sail. As the Guardian commented, it could be argued that it was BA that had struck gold along with the athletes. But we think it jolly well deserved it for stepping up to the mark on our behalf.

Hopefully it will keep BA2016 VictoRIOus (as it has been named), which will have special kudos on the runway at Heathrow. We will be able to tweet that we too have seen the gold nosed plane.

For pilot Steve Hawkins, flying the plane was the highlight of his career. “I flew one of our prime ministers around on a VIP trip and I’ve also been involved in a couple of other high-profile flights,” he said. “Nothing as important as this, nothing as high-profile as this, nothing as prestigious or as exciting as this. So bringing back Team GB from Rio 2016 has got to be the pinnacle of my flying in BA so far.” Well done Steve. 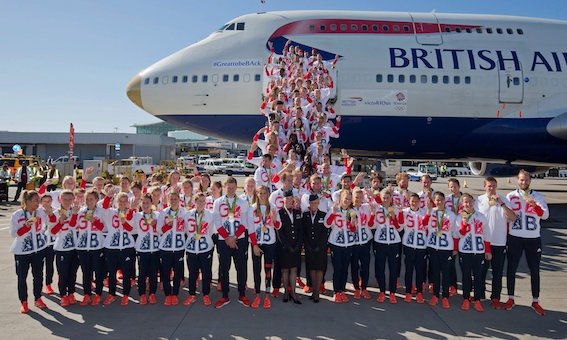